Start a Wiki
"Latveria" is the twenty-second episode of Assemble!'s Season Two and the fourty-fourth episode overall.

-Lucia von Bardass, - Dr. Doom called his Prime Minister and right hand into his throne room in Castle Doom, Latveria. -Doom needs you to bring Iron Man, Sue Storm and the Wasp to Latveria, where he will keep them in check to upgrade his scientific knowledge and powers. -

-Yes, Doctor. - Lucia nodded and got on a Latverian jet to New York, United States.

-Yes, Jan. I know it's really weird but I think we should go. I mean... Maybe it's something about Victor's death... And we all know he wouldn't want Reed there. - Susan shrugged.

-Why Janet and I should go too? - Tony asked the blonde woman.

-I will need backup. I will be alone in Victor's country... And being completely honest I'm afraid. - Susan murmured.

-We will help you. - Janet smiled, taking her friend's hands, earning a smile from her friend back.

Escorted by Von Bardas, they arrived to Latveria in a couple hours, but the welcome wagon wasn't friendly at all. Hordes of Doombots where waiting for them.

Susan pushed some of the Doombots some feet behind, giving the three of them time to escape.

-It was an ambush... - Janet said breathlessly.

-I know. - Tony said and activated a hologram through his arc reactor, trying to get in contact with Reed Richards back in the Baxter Building. -Damn... - Iron Man shook his head. -They blocked communications... The second they answer back in New York the signal dies and it gets disconnected. J.A.R.V.I.S. is down too... -

-So we're alone with the enemy. - Susan concluded with a deep breath.

-Exactly... - Jan covered her face. -I wish I had insisted Hank in coming too, but he was too busy with a new invention he barely paid attention! -

-Reed can be exactly the same, don't worry. - Sue shrugged, patting her friend's back.

-Are you dating again and you didn't tell me?! - Wasp protested.

-Girls, we need to find a way out of here. - Tony interrupted the two girls.

-We need to get split. - Stark informed, looking out of the cave where they were hiding at. -If one of us is able to escape and communicate, we should communicate with the Baxter Building, Avengers Mansion or Stark Tower. -

As soon as they were split, it wasn't difficult for Von Bardas to figure out where the Wasp was. Despite her small size, Lucia's cybernetic implants helped her locate the Avenger.

-Hey there, little Wasp. - The Latverian Prime Minister chuckled softly and shoot the hero with a stun gun, before turning her right arm into a virtual holographic net and capturing the tiny woman. -Now let's go inside this jar, where you won't be able to grow to your average size. -

-Doom wants the other two!!! - Victor von Doom ordered. -The Wasp only isn't enough for Doom!!! -

-I know, Doctor Doom. - Lucia nodded softly, after placing the Wasp inside an holographic bubble which neutralized any type of superpower. -I am going for the Fantastic Four member now. -

Finding Susan was as twice as easy as finding Janet, because she could locate her using her cybernetic vision despite the Invisible Woman's powers over invisibility.

-Oh yeah? - Susan asked, creating a force field around her.

-Yes, and look at this! - The Prime Minister turned her left hand into a stun baton which could break through the woman's force fields. After stunning the blonde she took her to another holographic bubble next to the Wasp's.

Lucia von Bardas was wandering through Castle Doom's halls, looking for Iron Man when the armored Avenger appeared next to her.

-Hey there! - Tony smirked inside the armor.

-Stark! - Von Bardas exclaimed, turning around to look at the hero and pressing the V button above her chest.

-What is that? - Stark asked uneasily, before being surrounded by thousands of Doombots.

-Does that answer your question? - Von Bardas smirked, before kicking the hero in the chest, off-balancing him. The Doombots kept on shooting at the armor until the Prime Minister, using her own hand, electrocuted the armor, leaving it unusable and stunning the man inside it.

Von Bardas pressed a button on her wrist and took it near her mouth. -Doctor... I have them all. -

"We will help you" 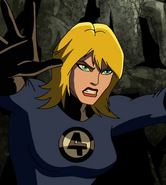 Lucia von Bardas vs the Wasp

"The Wasp only isn't enough for Doom!!!"

"Stark!"
Add a photo to this gallery

Retrieved from "https://marvelcomicsfanon.fandom.com/wiki/Latveria_(A!)?oldid=55756"
Community content is available under CC-BY-SA unless otherwise noted.