"Last Bastion" is the eighteenth episode of Assemble!'s Season Five and the one hundred and twenty-first episode overall.

Cable and Bishop appeared in front of the X-Mansion, holding their guns at any potential threats.

-All clear…- Cable muttered softly, as the pair walked to the School.

When the two got in, they found it destroyed and abandoned.

-This… This wasn’t supposed to happen until the next couple weeks…- Bishop commented.

-We… We got here late.- Cable nodded. -We need to get moving to the Last Bastion.-

Bishop approved of the idea, but as they were heading out, they found Bastion and two Prime Sentinels, ready to attack them.

-Speak of the devil.- Bastion smirked, holding his hand at the two time-travellers.

-We’ve come a long way, I am sick of pathetic attempts of jokes.- Summers rolled his eyes, firing his Plasma Rifle at the mechanical beings. Bishop joined in the attack, using his gun. The three sentinels recovered immediately, and fired an energy beam at the heroes at the same time. Cable created a force-field around himself, while Bishop took in the blasts and absorbed the energy.

-Worst mistake of your lives.- Bishop smirked, before firing a concussive blast at the three robots. The two Prime Sentinels were destroyed, but Bastion was just damaged.

-Let’s get the hell outta here.- Cable suggested, and the two time-travellers ran through the X-Mansion’s destroyed hallways. However, Bastion caught up to them and Cable realized this, stopping to face him. Unleashing the techno-organic virus within him, Nathan let his cybernetic arm loose on the Sentinel, harming him even more.

-Let’s go, Cable!- Bishop yelled once he realized his friend had been left behind. Nodding, Summers ran up to Lucas and the two got out of the Mansion. Holding Bishop’s arm, Cable bodyslid to the Last Bastion of mutantkind.

-Julio,- Shatterstar walked to his boyfriend, putting his hand on his cheek. -Are you ok?-

-I… This is not ok.- Rictor shook his head, looking out of the window of their hut in Calcutta.

-I know. I’ve been in this world for some time now… And I was getting used to it. I mean, it hasn’t been perfect… But we were working on it.-

-No, not at all. We weren’t targeted by robots. But it still wasn’t easy. I honestly don’t know what I’d rather have.-

-You are seriously comparing the gladiator times to this?- Rictor’s eyes widened, and Gaveedra nodded. -Wow… It’s the first time I actually hear you do that.-

-Hopefully it will be the last as well.-

Suddenly, a portal appeared before them and Blink, Sunspot and Warpath jumped through it.

-Who are you?- Shatterstar stood in front of Rictor, grabbing his swords and pointing them at the trio.

-We are members of the New Mutants, we are trying to recruit as many mutants as we can to fight off the Sentinels.- Blink explained.

-Are you seriously still calling yourselves the New Mutants when our numbers are lowest than ever?- Rictor raised an eyebrow.

-I know, right?! Oh, the irony!- Sunspot exclaimed, and Warpath looked at him sternly. -Sorry…- He muttered.

-We need to get going, our presence is going to be tracked soon.-

-Why did you come here then? We were living peacefully in this hut, we were being aided by the locals!- Rictor exclaimed.

-This is not the time to question what has been done already, Rictor, we came here to take you to the safest place where mutants can be right now!- Ferguson exclaimed.

Suddenly, the hut’s roof was blown away by a blast and three Nimrod Sentinels flew inside.

-I think they found us.- Sunspot commented.

Running towards a Faraday Nimrod, Blink opened a portal right under it’s head and closed it, beheading the mechanical being. Teaming up, Rictor made the ground under the Coulomb Nimrod crack, while Shatterstar resonated a vibratory shock-wave through the metallurgic properties of his swords, making the Sentinel’s insides vibrate. However, the Sentinel recovered and was ready to deliver a blow to the mutants when Blink opened a portal right in front of the Sentinel, that led right behind it, making the being punch itself. As the Sentinel fell to the ground, Shatterstar chopped its head off.

While Sunspot and Warpath were fighting the Tesla Nimrod, Blink opened a portal to them and jumped through it. The Sentinel changed his hand to an icy spike and was ready to pierce Sunspot’s body with it. However, Clarice opened a portal right in front of the spike. James stuck both of his vibranium daggers on the Sentinel’s back, piercing its armor. The Sentinel activated its restorative protocols, rebuilding itself. Warpath jumped off of the Tesla Nimrod and joined his teammates, who faced the Sentinel. The Nimrod Sentinel fired a blast at the three. Blink and Sunspot evaded the blast but Warpath, enraged, took it, dying in the act.

-WARPATH!- Sunspot flew towards his teammate.

-It’s too late, Roberto!- Clarice shook her head. -Gaveedra, Julio, are you coming with us?!-

-Count us in!- Rictor nodded, running towards the pink haired mutant with his boyfriend.

With the help of Blink, the four were barely able to make it out alive to the mutants’ last bastion in Moscow, Russia.

Looking up at the sky, Sunspot screamed, mourning his friend.

-We… We will make it, Bobby.- Clarice put her hand on Sunspot’s shoulder.

-How? How can we defeat this?- Roberto looked at his teammate. -We are running really low on body count, and these Sentinels keep on growing in number!-

-I don’t know how… But we will…- Blink looked down.

As the four walked inside the refugee, they met up with Professor X, Magneto, Wolverine, Kitty Pryde, Colossus and Iceman, who had grown facial hair after being away from the Mansion for so long.

-Where is James?- Professor X added when he spotted Blink and Sunspot alone, bringing Shatterstar and Rictor to the Monastery.

-He… He perished.- Clarice looked down slightly.

-Wait… Are… Are these the X-Men right now?- Rictor asked.

-Yes… Unfortunately, we are.- Professor X nodded, going to the new members of the Free Mutants.

-It was vicious…- Wolverine looked at Rictor and Shatterstar. -The X-Mansion was in flames, the Sentinels were targeting us one by one. They killed… So many of ours… Beast…-

-… Scott…- Professor X pursed his lips, looking down, then looked back up at the mutants.

-This is what we call, the last bastion of mutantkind.- Magneto looked at the precarious monastery in the mountains.

Suddenly, Cable and Bishop appeared in front of the mutants holding their empty hands up in the air.

-Professor X… We need to talk.- Cable said, looking at the X-Men leader.

-Who are you?- Magneto aimed his hand at the time-travelling mutants.

-I am Nathan Summers and this is Lucas Bishop. We come from the future to warn you.-

-However, we were late. When we got to the X-Mansion we found it empty and destroyed.- Bishop continued. -We needed to warn you of the Sentinel threat, that you obviously know about.-

-How are you two alive if Sentinels are annihilating us?- Wolverine scrunched his face.

-Not every mutant dies. Some are taken prisoners by the Sentinels and experimented on…- Cable explained.

-And Trask Industries, under Steven Lang’s control, create Master Mold, a robot that creates armies of Sentinels and takes in the different X-Genes from the captured Mutants to build better and more adaptable Sentinels.- Bishop continued.

Bishop pointed at the M mark on his eye, nodding.

-We cannot travel back to 1997 because we’re reliant on technology this decade doesn’t have. But there is a way to stop this.- Cable added.

-Her.- Nathan pointed at Kitty Pryde. -She is the key.-

-Me?- Kitty asked, looking at the Professor.

-So that is possible?- Xavier looked up at Cable, who nodded. Then, the Professor looked at Kitty. -I… I have thought of a way in which you can phase someone’s consciousness to its old body.-

-I thought my powers didn’t include that.-

-I thought it was unlikely too, until Nathan confirmed it. However, the travelling person’s consciousness would be stretched too much… Stretched beyond repair.-

-Unless…- Summers was about to correct the Professor, but he continued.

-Unless they have a miraculous healing factor.- Xavier looked at Wolverine.

-Is it?- Cable walked to Wolverine. -Isn’t it even crazier to see your own race being exterminated or treated like sh*t while you know you could’ve done something about it?!- Logan was about to say something back but held himself. -You’re right. What shall I do?-

-There is one way to stop this from happening.- Cable started explaining. -Preventing Mystique from killing Bolivar Trask back in 1997. Without that single historical fact, Congress would have never approved this massacre, even less in the 21st Century and Trask would be stopped by the Government. You will wake up in 1997, right where you were back then. However, you’ll remember all this.-

-Find me.- Professor X continued. -I was just starting to recruit young mutants back then… Jean, Scott, Ororo. Convince me of training these young mutants way earlier than I originally did. Convince me to fight for something and not just be a safe haven for teenage mutants.-

-Find me as well.- Magneto continued. -I was not in the best situation in 1997 after being charged with murdering the President, John F. Kennedy. I was stuck in the Pentagon.-

-So I should free you?- Wolverine raised his eyebrows.

-Just make sure both this body and your body back in 1997 are kept alive.- Cable continued.

-How can I make sure this body is kept alive?-

-That will be our task.- Bishop nodded.

-Alright, Pryde. I will guide you through this.- Cable looked at the young mutant, as they walked inside the Monastery with Wolverine and Professor X. 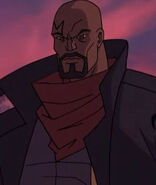 "We’ve come a long way, I am sick of pathetic attempts of jokes."

Bastion firing a blast at the time-travellers

"Worst mistake of your lives."

"I think they found us."

Shatterstar and Rictor vs a Nimrod Sentinel

A Nimrod Sentinel punching himself thanks to Blink

Shatterstar cuts a Sentinel's head off

Sunspot and Warpath vs a Nimrod Sentinel

The Free Mutants get to the Last Bastion

The Free Mutants at the Last Bastion

"They killed… So many of ours… Beast…"

"Good luck, Logan."
Add a photo to this gallery

Retrieved from "https://marvelcomicsfanon.fandom.com/wiki/Last_Bastion_(A!)?oldid=140549"
Community content is available under CC-BY-SA unless otherwise noted.