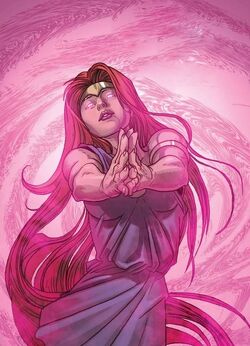 Known initially as Lorelei due to her uncanny resemblance with the Asgardian sorceress of seduction, Lani Ubanu is a French mutant and a former mutant rights activist who eventually have gotten tired of her unprogressive career for the cause for the future of mutantkind, subsequently becoming a motivated terrorist and con artist in the ruthless Magneto and his service within the latter's dangerous, extremist society known as the Brotherhood of Mutants. Along with it, Lani has also been usually described by her teammates and even her enemies as an outstandingly beautiful woman, earning her the local title of "Princess of the Citadel," as she resides in the island of Genosha, much to both her appreciation and annoyance often times, depending on her mood.

For several years of her life as a loyal follower of Magneto, Lorelei continuously dedicated her next of service committing acts of terrorism against the abusive clutches from the rogue side of humanity, especially when the heroic X-Men's existence was finally known to the community, the two groups repeatedly came into conflict with one another. Though she was defeated and arrested multiple times, Lorelei managed to always escape custody along with her teammates.

After a few years of being an extreme mutant terrorist, Lani easily earned Magneto's full trust and later became one of his so-called "loyalists" along with several others, which also earned him a higher rank as one of his strongest and most influential & persuasive forces within the Brotherhood. However, their loyalty would be put to the test after a new member was accepted by Magneto to join the Brotherhood, revealing to be the "mutant" scientist Nathan Essex, who was otherwise known as Mister Sinister.

Despite his controversies regarding if he was really a mutant or if he was actually just a mutate and a few of Magneto's loyalists believing that accepting Sinister would be a terrible and horrendous choice for the Brotherhood's future, Essex would later efficiently prove himself to be a worthy member of the mutant supremacy, with Magneto even believing that he was worthier and more useful than most of his loyalists, offending them in the process, including Lorelei himself. In an attempt to convince Lorelei of his "true" intentions for the Brotherhood, Essex was able to develop an enhancement serum, injecting into Lani's veins which ultimately amplified her already-powerful powers to a high, unspecified extent. Sinister's serum originally that was supposed to excrete a sedative into her veins and get her under Essex's thrall, although it was later revealed that Lani's hormones had somehow successfully counteracted the negative effects of the sedative, causing Sinister's plan to control her for his diabolical cause eventually fail.

Due to Mister Sinister's eventual betrayal against Magneto, the Brotherhood inevitably broke into two factions, Magneto's and Sinister's side. Alongside the remaining members of Magneto's loyal side, Magneto and his original faction later allied themselves with the Ultimates and the rest of the heroes to end Sinister's reign of chaos. But despite their victory in helping the defeat of Sinister, the Brotherhood never manage to reform its state on Genosha, causing for them to have a momentary hiatus and split apart throughout the rest of different parts of the world, remaining to be hidden from the authorities, who began their search on mutant terrorists after the events of the Great Superhuman War.

After the days of Ultimate War, Lorelei was one of the unfortunate participants who were captured by the authorities, especially with Lorelei's acknowledged status as a dangerous terrorist, despite his efforts to actually end the war alongside Magneto's faction, rather than to win it with the far more diabolical Movement Alliance. Due to his previous and recent crimes as a member of the Brotherhood of Supremacy, Lani was imprisoned at the Raft along with some of his fellow teammates, as a legal response in paying for the mutant terrorists' countless crimes.

At some point in her months of being imprisoned on the Raft, Lani coincidentally came across to meet a neighboring male inmate by the name of Paul Ebersol. The two would get along pretty well, developing a flirtatious kind of relationship, to the point where they became exclusive lovers in secret, which consistently lasted until Ebersol was secretly and unexpectedly broken out of the facility by his teammates, the vigilante known as the Thunderbolts. In response to Ebersol's sudden escape from the super maximum security prison, Lani felt completely heartbroken, although the latter still persistently hoped that one day in the near future, they're evetually going to be reunited once more.

During the later days of the Superhuman Registration Act that would subsequently cause the chaotic conflict known as Civil War, Lani and her fellow teammates were eventually broken out of the maximum facility by his own leader, Magneto himself. Lorelei and the reformed Brotherhood came to help out their fellow helpless mutant fugitives and save them from the abusive and strict forces of the pro-registration led by Iron Man and S.H.I.E.L.D. under the directorship of Maria Hill. However, instead of deciding to fight with Magneto against the authorities, Lani was insisted and obligated to help the others get them into safety by getting them to the recently-abandoned island of Genosha and give them momentary settlement in the meantime.

In the late aftermath of the Phoenix Prophecy, followed the last known man-made assault that would have almost decimated the last hope of mutantkind's ultimate survival. During the first weeks of the newly-elected President of the United States, Larry Trask (son of the late Bolivar Trask), and the morally-corrupt senator Mojo Adams, had publicly announced the secretly corrupt and two-faced administration's first weapon-based project of the restored Trask Industries since the mid 1980's, known as the Sentinel: Mark X Program. According to the anti-mutant organization themselves and the anti-mutant president, the new program solemnly promised a definitive containment of the growing mutant threat, both those who were considered as heroic mutants and those who were actual threats such as the existence of mutant terrorists.

As a result of these actions caused mainly because of a powerful figure's undying hatred and aggression towards the mutant kind, the marginalized race was once again have to face the next largest threat on their own as both the heroic and evil forces of the mutant race were forced to assemble and at the same time, hide within the remote island of Magneto's Citadel, Genosha, along with other remote locations, in the meantime. Lorelei and the surviving members of the Brotherhood, forming into a subdivision faction known as the Morlocks, were willingly present in the assistance of rescuing lost and helpless mutants and human supporters across the United States and several parts across Western Europe, with the help of telepath Emma Frost, the use of the Cerebra, and their access of fast transportaion through Blink's portals.

Unfortunately, during Mortimer and his small team's rescue mission in California, an apparently destroyed Sentinel was able to attach a chip-sized tracker into most of the team before it was fully deactivated, including himself. As they would immediately return back to the island of Genosha, Mortimer was too late to find out that the trackers secretly attached to them gave the Sentinels an ultimate advantage to infiltrate the island full of mutant refugees.

As he and his teammates witnessed the destructive arrival of the mutant killing machines within the Citadel in horror, Lorelei, along with Toad, Callisto, Ink, and her long-time boyfriend Fixer, had courageously offered the remainder of their lives in order to give most the mutant refugees enough time to successfully escape the island through several Blackbird aircrafts by fighting the Sentinels, despite being outnumbered and unmatched by the powerful machines of destruction and mutant extermination.

Sadly enough, Lani was critically shot by a pyrokinetic-powered Sentinel, mortally wounding her in the process. Much to Ebersol's shock and concern, he repulsively came to his lover's aid, not even caring that they're already surrounded by overpowered Sentinels. Callisto tried to get to the two to help them, only to be thrown off the island's cliff from a Sentinel's powerful blast, driving her straight the waters below that left her whereabouts unknown. As Lani starts to lose consciousness from blood loss and succumb from her injuries, Lani slowly dies in Ebersol's arms as they mouthed their last words with one another, promising that they would always love one another, and not even death could take that away from them.

Three days since the Sentinels' assault on Genosha have passed, which subsequently led into the island's gradual destruction, Callisto was later revealed to have been the only known survivor of the attack, sadly confirming Lorelei's demise, along with the rest of her teammates. As the living heroic mutants have returned to the deserted landscape of Genosha weeks later, Callisto and Kitty Pryde had found two permanent shadows of individuals next to each other on a damaged wall, with one resembling Lani, while the other resembles Paul. Confirming that these were the last moments and only remains of the latter together before they were brutally vaporized by the Sentinels, Callisto could only break down in tears while Pryde comforts her, knowing that she had lost the woman who served as a younger sister to her for almost an entire lifetime.

Retrieved from "https://marvelcomicsfanon.fandom.com/wiki/Lani_Ubanu_(Earth-61615)?oldid=265674"
Community content is available under CC-BY-SA unless otherwise noted.