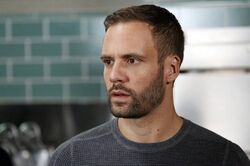 Lance Hunter was a skilled mercenary whose squad was hired to perform an op for S.H.I.E.L.D. Unfortunately, things went wrong and all of his compatriots ended up dead. Hunter was taken into S.H.I.E.L.D. custody and debriefed of the situation, but he was rattled and he wanted revenge against Hydra.

He was enlisted by Phil Coulson to join his team of operatives that were dedicated to bringing Hydra down. While serving with this squad, Hunter met Mockingbird, and the two instantly became attracted to each other, despite driving each other crazy. They began an intense relationship, constantly breaking up and then hooking up and getting back together, and so on, much to the annoyance of their fellow teammates. But when the time came to get his head in the mission, Hunter never let his teammates down. He never wanted to see someone he cared about die again.

[[Category: In a Relationship with Bobbi Morse Characters]]
Retrieved from "https://marvelcomicsfanon.fandom.com/wiki/Lance_Hunter_(Earth-101)?oldid=249924"
Community content is available under CC-BY-SA unless otherwise noted.