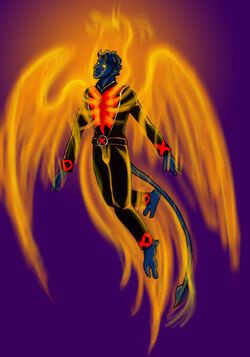 Single
Origin
Origin
After his resurrection by the Phoenix, he joined Captain America's Avengers to further Charles Xavier's goals.
Creators

Nightcrawler's history is exactly the same as that of Earth-616's Nightcrawler up until the Marvel NEW! relaunch.

When the Phoenix Force returned to Earth, it resurrected Nightcrawler to use him as a vessel. He joined the Uncanny Avengers after regaining his psyche. He was briefly abandoned by the Force, but after entering Storm and Thunderbird, and being seen with Colossus of the Future, he regained the Force, possibly permanently.

Mutant Physiology: Nightcrawler has the same powers as his mainstream counterpart:

Phoenix Force Avatar: Nightcrawler has the same powers as any other avatar of the Phoenix Force.

Phoenix is a master swordsman, acrobat, and combatant.

Retrieved from "https://marvelcomicsfanon.fandom.com/wiki/Kurt_Wagner_(Marvel_NEW!)?oldid=84230"
Community content is available under CC-BY-SA unless otherwise noted.