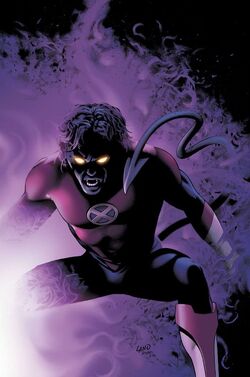 Blue
Skin
Blue
Unusual Features
Covered in dark blue fur and skin; Pointed ears; Three fingers on each hand and two toes on each foot; Prehensile tail capable of holding his body weight. His body seems to burn with a golden inner fire which shows though his eyes nostrils and mouth. His breath is visible as a golden mist; Fangs
Status
Citizenship

I bamfed here, I bamfed there... I bamfed everywhere, yet nobody even seems to care unless they see me burn! Thankfully, everything changed, vhen I vas brought into this place... Danke schön, meine neue familie...

Kurt Szardos Wagner was the son of mutants Azazel and Mystique, who both served the supremacist group known as the Brotherhood. When Azazel left the Brotherhood into hiding after he ended up trying to assassinate Magneto as an attempt of taking over as its leader, Mystique followed Azazel somewhere in Germany and disguised herself as a town locale by the name of Margali Szardos, wherein the two sparked an affair which lasted for months, until Azazel finally figured out that the woman he had been seeing was Mystique after, whose true intentions were supposedly to "take care" of him in response to his betrayal, under Magneto's orders. As a result, the two fought in a duel almost to the death, though both parties were reluctant considering how passionately attached they were to each other for the past months. An injured Azazel escaped Germany once more into parts unknown, though Mystique knew she intentionally let him go.

The mutant child that would be named Kurt was eventually born to the Mystique around the early 1980s in the state of Bavaria, Germany, though she was brokenhearted to see how much her son resembles Azazel. Despite knowing this oddly striking familiar trait that her son possesses, Mystique nevertheless was willing to take care of her blue newborn child along with her on-and-off lover Destiny, who was known to be fond of children in the Brotherhood's nation of Genosha. However, when Mystique was almost caught by both anti-mutant citizens and her fellow Brotherhood, she carefully and discreetly left the infant inside a circus marquee somewhere in Munich (capital city of Bavaria), where he was found and eventually raised under the care of circus couple Christian Wagner and Margali Szardos. Growing up in the Bavarian mountains, the adolescent Kurt became a prominent and efficient member of a traveling Munich circus run and organized by his highly-religious and caring foster family, which was capitalized as the locally-renowned Wonderful Szardos. Publicly named as the Majestic Nightcrawler (though some confused or mutant-phobic audiences would recognize and demonize him as the "Magnificent Monster" or the "Blue Devil" among other more dehumanizing names), Kurt used his natural mastery in gymnastics and some of his newly-found powers of teleportation as "magic tricks," working with a passion as an entertainer in his family circus throughout Bavaria.

However, while he was lovingly nurtured by his foster mother and was well-respected by his foster father despite his blue skin and powers, Kurt was often feared, envied, and to an extent, abused by his older foster brother Stefan, who secretly sold him out to dangerous traffickers in exchange for a considerably-high amount of money to fund their circus into glory and fame, taking Kurt to a mutant fight club against his will. For days, he fairly fought against several other mutants while grieving on the assumption that his family had abandoned him for being a mutant now that most of the circus' audience knows of his true nature, though fortunate for him, Kurt was eventually liberated by someone whom he thought to be his foster mother, though it was later revealed to be her biological mother Mystique, taking the form of his foster mother who was still on the search for Kurt, whom she and the rest of the Szardos thought he ran away from home out of rebellion and won't be coming back due to several lies his foster brother has fabricated to his parents.

Fearing how much Magneto still held a grudge towards Azazel for betraying him and how it may affect his behavior and impression towards her very son with Azazel, Mystique didn't consider bringing Kurt into Genosha and instead brought Kurt to the mutant-tracking mutant Caliban to get him to a passport out of Germany, into the United States of America, knowing someone else who was just as willing and passionate to raise and train mutants to develop into the best versions of themselves.

She soon brought him to Westchester County still under the identity of Kurt's adoptive mother, where the mutant pacifist Professor Charles Xavier enrolls him into Xavier's School for Gifted Youngsters, welcoming him under his haven for mutant children so that he could be treated with love, respect, and acceptance, something that the outside world really needs for other mutants who are mostly being persecuted and simply used merely for their gift and nature. By the second Xavier used the Cerebro to figure out the fact Kurt was Mystique's lost secret son, he promised his old friend that he would definitely do everything in his power to raise her son just like he does with the rest of his "children," the residents of the X-Mansion. As a new learner in the X-Mansion's student body, he befriended mutants in the form of senior students including Scott Summers, Hank McCoy, Ororo Munroe, and Jean Grey, though he would also befriend students and trainees as part of the X-Men, including Warren Worthington III, Bobby Drake, Rogue, Jubilee, Piotr "Peter" Rasputin, and Kitty Pride.

While Kurt was still longing for his foster family back in Germany, Xavier calmly assured the young mutant as he gave Kurt the chance to communicate with them via Cerebro. Kurt was incredibly grateful by the Professor's considerate offer, but assuming how much of his family has either probably moved on (or had never moved on), Kurt used this opportunity to put a closure to his past life by talking to her foster mother one last time, before requesting Xavier to put a psychic barrier into their minds to prevent them from ever remembering any fragment of memory that they had with Kurt and erase it in the process, leaving no trace of Kurt in the earlier lives of the Szardos, thus allowing both sides to move on for the better.

After years of learning and training under the guidance of Xavier's School for Gifted Youngsters, Kurt eventually got the chance to join as participate as a member of the X-Men in the outside world and begins to dedicate his young adult life fighting for the peaceful coexistence of mutants and humans in the present and in the optimistic future, using the now titular codename of Nightcrawler, a name he previously used from his past as an entertainer in the circus, which he is now putting into a more heroic and altruistic use.

Homo Superior Physiology: Nightcrawler is a mutant whose mutation granted him a demon-like physiology which him also gave him the ability to teleport himself, the clothes he is wearing, and within limits a certain amount of additional mass which is in contact with him. He teleports, or "bamfs" as he and most of his teammates would like to call it, by displacing himself into the Brimstone Dimension, traveling through it, and then returning to his own dimension at a certain distance from his point of departure. He consciously determines his point of return. The entire process occurs so quickly that Nightcrawler is unaware of being in the Brimstone Dimension at all. Nightcrawler guides himself through the brimstone dimension by an unconscious, natural direction-finding sense. Although Nightcrawler controls his teleportation ability with his conscious mind, his power to teleport is not psionic. Rather it is the result of an unknown biochemical/biophysical reaction which he triggers mentally.

Retrieved from "https://marvelcomicsfanon.fandom.com/wiki/Kurt_Wagner_(Earth-61615)?oldid=266458"
Community content is available under CC-BY-SA unless otherwise noted.