Nightcrawler grew up in a circus, and was eventually run out of Germany by villagers who believed him to be a demon. He was eventually found by Charles Xavier, who gave him a home with the X-Men. He eventually decided to call himself Nightcrawler and become a hero, going on to be recruited by Nick Fury to join the Ultimate Alliance and fight against the Cabal. 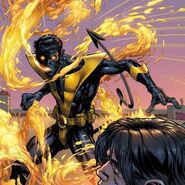 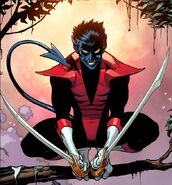 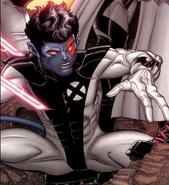 Age of Apocalypse
Add a photo to this gallery
Retrieved from "https://marvelcomicsfanon.fandom.com/wiki/Kurt_Wagner_(Earth-6110)?oldid=252001"
Community content is available under CC-BY-SA unless otherwise noted.