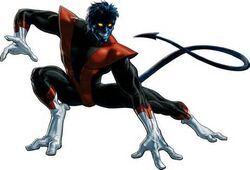 Blue
Unusual Features
Nightcrawler has only three digits (including an opposable thumb) on each hand. He also has only 2 toes on each foot, each longer than an ordinary human's. He has a prehensile tail, approximately 3'6" long, which could support his own weight. Nightcrawler has pointed ears and pronounced fang-like canine teeth. His spine is more flexible than an ordinary human being's, allowing him to spend much of his time in a semi-crouching position without damaging his posture and enabling him to perform contortionist-like feats. His body is almost entirely covered with a fine blue-colored fur.
Status
Citizenship

Little is known about Nightcrawler's life before the Masters of Evil attacked the S.H.I.E.L.D. Alpha Helicarrier. It can be assumed to be similar to his mainstream counterpart.

Nightcrawler was first seen attempting to escape Castle Doom in Latveria, using wall-mounted swords to fight off Doombots. However, he failed to escape when a booby trapped door rendered him unconscious. When the heroes of earth, all united to combat the Masters of Evil led by Doom, learn of his capture, they use the Orb of Teleportation in the Sanctum Sanctorum to travel to Latveria, but are unaware that the orb was rigged by Baron Mordo to send them to Arcade's Murderworld. There, they come into conflict with Jean Grey, who had been consumed by the Phoenix and used as a puppet for the Masters of Evil until her consciousness is brought back. When Arcade is defeated and interrogated, he reveals that Doctor Doom captured Nightcrawler and used the Mutant Amplifier on him so he could teleport to Mephisto's realm and make a deal with said demon.

The heroes travel to Mephisto's realm and fight the many hordes of hell until the demon Blackheart, who had just kidnapped Jean Grey puts the heroes to the ultimate test - which hero will they save, and which will be killed? Both heroes selflessly insist on the player choosing the other. Jean Grey is decidingly saved. The heroes fight Mephisto who has brought back the soul of the dead Nightcrawler and twisted their mind to serve only him, but their heroism wins over the evil brainwashing and they finally defeat Mephisto, ultimately dying in the process.

Despite Nightcrawler's superhuman powers, he is just as susceptible to disease and physical injury as any ordinary human. Also, because he is a Neyaphem, Angel's blood, which heals everyone else, hurts him, normally adding to whatever injury he received.

Retrieved from "https://marvelcomicsfanon.fandom.com/wiki/Kurt_Wagner_(Earth-6109.2)?oldid=259064"
Community content is available under CC-BY-SA unless otherwise noted.