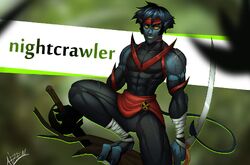 I normally don't like to stab a man in his back... but in your case, I'll make an exception.

Kurt Wagner was raised to believe that everyone had good in them, despite his mutation making it clear to him early on that this was not true. He never truly felt like he belonged with the X-Men, feeling that it was his purpose as a mutant to take vengeance on those who let vanity run their lives.

After the Order of the World Tree destroyed civilized society on Earth, Nightcrawler and the other few remaining X-Men who survived the onslaught went on to relocate to Krakoa, where they became followers of Apocalypse.

[[Category: In a Relationship with Illyana Rasputin Characters]]
Retrieved from "https://marvelcomicsfanon.fandom.com/wiki/Kurt_Wagner_(Earth-2001)?oldid=262340"
Community content is available under CC-BY-SA unless otherwise noted.