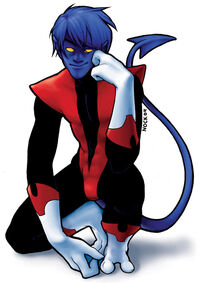 Blue
Skin
Blue
Unusual Features
Nightcrawler has only three digits (including an opposable thumb) on each hand. He also has only 2 toes on each foot, each longer than an ordinary human's. He has a prehensile tail, approximately 3'6" long, which could support his own weight. Nightcrawler has pointed ears and pronounced fang-like canine teeth. His spine is more flexible than an ordinary human being's, allowing him to spend much of his time in a semi-crouching position without damaging his posture and enabling him to perform contortionist-like feats. His body is almost entirely covered with a fine blue-colored fur.
Status
Citizenship

Suffering from postpartum depression, as well as the heartbreak of separating from Azazel she decided she wasn't ready to be a mother and abandoned the baby in a basket in a river stream.

The baby would survive and would be saved by German gypsy woman; Margali Wagner. She would take him back with her to the circus she was travelling with, care for him and name him Kurt and would go on to raise him, despite his appearance. Long before his teleportation power emerged, Wagner had tremendous natural agility and by his adolescence he had become the circus's star acrobat and aerial artist.

At sixteen years old, Kurt would get into an argument with the circus' wingmaster, whom he always had a bad relationship with, after he tried to get Margali to do something she didn't want to. Because of this argument, Kurt was attacked by the ringmaster and his men, Margali told Kurt to flee.

Kurt would be cornered in the woods with the ringmaster and his men pointing guns at him, as they are about to shoot him, the stress of the situation and Kurt's adrenaline levels triggered his mutation and caused him to teleport. Kurt teleported somewhere else in the woods and decided to flee the current country he was in.

Some weeks after New York was attacked by a giant entity, Kurt migrated to New York and had heard of a safe haven for Mutants, Xavier's School For Higher Learning. Kurt would travel to Westchester where he would meet with Charles Xavier and tell him of his life and how he needed someplace to stay. Charles would agree to allow Kurt to stay without hesitation.

While travelling, Kurt had read of the X-Men's efforts and was inspired by them, a few days later he would ask Charles if he could join the X-Men to which he agreed. Weeks later, other new mutant, Kitty Pryde would also enroll at Xavier's and he would befriend her to them both being newcomers. Kurt would go on to develop a crush on Kitty and was heartbroken upon discovering of Kitty's relationship with Quicksilver.

Teleportation: Ability to teleport himself, the clothes he is wearing, and within limits a certain amount of additional mass which is in contact with him. He teleports by displacing himself into the Brimstone Dimension, traveling through it, and then returning to his own dimension at a certain distance from his point of departure. He consciously determines his point of return. The entire process occurs so quickly that Nightcrawler is unaware of being in the Brimstone Dimension at all. Nightcrawler guides himself through the Brimstone Dimension by a subconscious, natural direction-finding sense. Although Nightcrawler controls his teleportation ability with his conscious mind, his power to teleport is not psionic. Rather it is the result of an unknown biochemical/biophysical reaction which he triggers mentally. When he disappears in teleporting, Nightcrawler leaves behind smoke with a stench reminiscent of burning brimstone. This is a small portion of the atmosphere of the Brimstone Dimension that escapes while the aperture is open. His teleportation is invariably accompanied by the muffled sound of imploding air rushing to fill the vacuum left where Nightcrawler's body was, creating his signature *BAMF* sound. Nightcrawler's powers automatically displace liquids and gases when he arrives in the course of a teleportation. His powers will not displace solids, however, putting him at risk for materializing inside solid matter, causing serious injury or death. As a consequence, Nightcrawler typically teleports only to places he has been to before or knows the layout of, or line-of-sight teleportation (even though his actual range is much further). Kurt's intuitive spatial awareness allows him to track his movements instinctively and with greater precision than the average person, helping him to pinpoint locations for a "blind" teleport. Nightcrawler can use his powers offensively by grappling with an enemy and teleporting him or her in a series of rapid jumps. The strain of these "multiple ports" can exhaust foes without superhuman endurance while Nightcrawler remains strong enough to continue fighting. The limits to the mass that Nightcrawler can carry with him while teleporting, and the limits to the distance over which he can teleport himself with additional load is unknown. When he transports a passenger over even moderate distances, they both feel weakened and ill, to the point of exhaustion. Teleportation over further distances could be fatal. Through practice, Nightcrawler has increased the mass he can teleport with him. (He once teleported himself and Storm from the center of a small island into the water just off its coast without harming either of them). The upper limits of this capacity are as yet unknown.

As part of his power, Nightcrawler has also exhibited a limited ability to sense the teleportation of other beings.

Master Acrobat: Nightcrawler is an Olympic-class acrobat thanks to his flexible spine that allows him to perform contortionist-like feats and to go long periods in a semi-crouching position without injury.

Master Combatant: He is a skilled hand-to-hand combatant and a master at fencing, which he can even perform with his tail, which is strong enough to support his entire body weight. Martial arts training.

Aviator: He has served as the team's pilot and, with Wolverine, has also been the mechanic of the X-Men's X-Jet.

Medic: He has been the team medic when no more qualified X-Men were around to do so.

Multilingual: Nightcrawler is fluent in various languages due to his youth travelling around Europe as the star performer in a circus and knowing the language of wherever they were that week was very handy. He speaks his native German along with English, French, Spanish, and Italian. Professor X has downloaded both Russian and Japanese into his students minds.

Nightcrawler possesses above average strength of a teenage boy of his age, height, and build who engages in intensive regular exercise. At his peak, Nightcrawler can lift about 250 lbs.

Despite Nightcrawler's superhuman powers, he is just as susceptible to disease and physical injury as any ordinary human.

Retrieved from "https://marvelcomicsfanon.fandom.com/wiki/Kurt_Wagner_(Earth-1111)?oldid=176640"
Community content is available under CC-BY-SA unless otherwise noted.