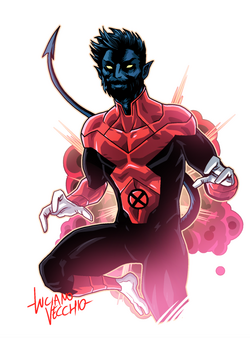 I believe in a great many things. Destiny, however, is not one of them.

During the time when the shape-shifting mutant, Mystique, was living undercover in Germany as Baron Christian Wagner's wife, she had an affair with the demon Azazel. This conjugation resulted in the birth of their son, whom Baron Wagner believed to be his own. Named Kurt Wagner at birth, his mutation was apparent and obvious. Baron Wagner was disgusted, and demanded the child be executed.

Mystique was unwilling to let her child die, so she went on the run. She eventually left him in the care of a loving couple unable to have children who lived in a small German village by a river. They raised Kurt as their own son and taught him love and compassion. Whenever people would discriminate against Kurt because of his appearance, he simply felt sorrow for their small mind, and eventually came to find faith in the Catholic Church.

Despite trying to help people find peace through faith, he was eventually betrayed by the Church and the people who were pressuring them to excommunicate the "demon". Forced to go on the run, he was saved by the fellow mutant, Charles Xavier, and his associates Jean Grey and Warren Worthington. The sudden appearance of the Angel gave halt to the mobs, and when he carried away Kurt in his arms, they were all left confused and distraught.

Kurt was then given a home at the Xavier Institute, where he learned to hone his teleportation abilities as well as his uniquely agile physique. He would go on to use the codename Nightcrawler when he and the other students formed the team X-Force to save Professor X after he was abducted by Magneto. It was during this confrontation that Kurt learned Mystique was his mother, which devastated him. However, he then became determined to win over her heart and bring her back to the side of righteousness.