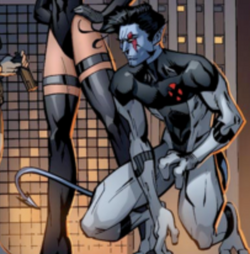 I am the handsomest, most devilish handsome devil you will ever meet.

Kurt Darkholme was born in a small German village, and was taken in by a nice couple after his mother, Mystique was separated from him by anti-mutant protestors. By the time Kurt was 10, he was found by his mother just as they were recruited into the X-Men by Magneto.

Since joining the X-Men, Kurt has adopted the name Nightcrawler and grown awfully fond of violence after he learned proper swordsmanship. However, despite being filled with such anger, he loves his mother and adopted sister, Rogue, more than anything.

Retrieved from "https://marvelcomicsfanon.fandom.com/wiki/Kurt_Darkholme_(Earth-9999)?oldid=245824"
Community content is available under CC-BY-SA unless otherwise noted.