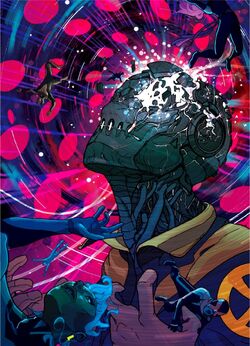 The Healer, The Collective, Star-Man, Glowing Head, Man Whose Mind is a Star, Mutant Deity, Moses of the Mutants
Identity

Black
Unusual Features
His head was replaced by a small star due to his first mutation during puberty.
Status
Citizenship

Refuge? Is that what you see in your own intentions? For all I see, you've done nothing but inflict pain and carry unecessary burdens onto your own selves... Training your own children to become something they've never wanted, nor intended to be...

Kuan-Yin Xorn was a powerful mutant whose powers had first manifested when his normal head to be burned away by a tiny star during his first mutation in his puberty. He was able to use these abilities in many ways with the best of intentions to improve his hometown and city, but was kept isolated for a short while, given the dangerous nature of his powers. Because of this, Xorn was given by his uncle to wear a mask composed of Vibranium that safeguarded others from the dangerous effects of their powers' fullest potential.

However, as time passes by, Xorn eventually grew tired of his community's worsening views and status, having to experience both first and second hand abuse, prejudice, and injustice against the existence mutant race within his region, a series of inhumane acts committed even by his own twin brother, Shen Xorn, a hardcore anti-mutant whose hatred rooted from his lover getting killed at the hands of mutant activists. As a response to his own people's hateful unjustified crimes, Xorn was finally driven into madness and desperation, to which he had made the ultimate decision to use his powers once again to free his fellow mutants from the shackles of Xinjiang's merciless authorities, causing Xorn to lead the once-oppressed mutants to escape the region and find themselves another, much safer place for the mutants to take refuge in.

Eventually, Xorn was able to locate a remote hidden forest in China using his telekinetic powers, successfully forming an building a new city within the latter that would eventually be called the isolationist mutant community of Tian. For the next few years, Tian eventually developed into a technologically-advanced, floating city, thanks to both the contributions of Xorn's seemingly unlimited power and modern technology & equipment being combined altogether. The city was so advanced than most of Asia's civilization during most the time, it even surpassed and avoided the chaotic and traumatic global events that occured, from the likes of the Chitauri Invasion, the Hydra Uprising, the Ultimate War, and the Superhuman Civil War, preserving the peace and prosperity that was kept within the safeguarded mutant city.

However, Tian's consistent cover was blown and its very existence along with Xorn was eventually exposed not necessarily to the entire public during the "Dark Reign" of Norman Osborn throughout the western nations, but to their fellow mutants coming from the United States, the courageous X-Men (after they've used the assistance of the modified Cerebra, conveniently locating Tian), and extremist ones from the remote island of Genosha, the infamous Brotherhood of Mutants (when the X-Men reluctantly came to their aid and assistance to meet the leader of Tian).

Unbeknownst to Xorn at first on what their true intentions were to him and his city besides refuge from the rogue authorities, Xorn discreetly figured out the truth through reading Jean Grey's mind when he shattered her psionic barrier, learning that both sides have also come for his ultimate power and help them take down Osborn's abusive anti-mutant forces roaming around the cities.

The only difference was that the leader terrorist Magneto had thought of having his own reasons to manipulate Xorn into using him as a weapon for the Brotherhood against humanity, while Professor X's intentions were revealed to know first if Xorn was trustworthy enough to be their ally and member or his power was too dangerous too be contained. Because of the following revelations, Xorn was heavily conflicted and devastated on which side he should choose, before giving himself a conclusive decision to trust neither of them while he has yet to confront both leaders to clarify themselves to why they actually came to his hidden city in the first place.

With the defeat and death of Stryfe at the hands of Cable and the X-Force, their success had seemingly vanquished his reality-altering plan to converge his with the modern reality by reawakening this reality's Apocalypse, but little did they were aware of, another global threat was emerging from the darkness, in the form of a reborn Mister Sinister, with his new scheme in balancing all life on the planet, including the likes of Mutants, Inhumans, Atlanteans along with many more species, through his new protocol of causing a global extinction event, although the latter was eventually stopped by the heroic forces composing the X-Men, Brotherhood, S.H.I.E.L.D., and several more mutant-supporting groups which included Xorn and other Chinese-based mutants fighting against both the reawakened Apocalypse and the genocidal wrathful-minded Mister Sinister.

Shortly after returning to China, Kuan-Yin was perplexed with mixed emotions to find out that his twin brother Shen was a latent mutant. Filled with overwhelming guilt for his past hateful crimes against other mutants, Shen tried to kill himself until Kuan-Yin barely stopped him in time, convincing that his past shouldn't define who he was that that moment, before he begged and asked for his help in liberating his comrades if he's truly willing to change for the betterment of their people's tomorrow. A destructive revolution was ignited against the Government of China after thousands of people, both human and mutant, were inspired and motivated by Shen's redeeming acts to free every captured mutants he was responsible for hunting and imprisoning since the beginning.

Taking place only a few months after the events of X-t(In)ction Event, the powerful mutant Jean Grey was still on the verge of recovering from the deadly effects of the villain's Legacy Virus, when she started perceiving repetitive nightmares caused by psychedelic entities with the same objective of killing off the Phoenix Force, since it was claimed to be the next universal threat since the events of both Infinity War and Infinity Crusade, worsening her condition from time to time which slowly turns her insanely dangerous having still possessed by the powerful unstable Phoenix.

While the some of the X-Men still believes that the Phoenix Force deserves to be saved and would eventually herald the rebirth of the Mutant Species, most who have sensed the Phoenix's instability, including other cosmic entities who persistently haunts Jean and a rebel mutant group led by a desperate and deluded Cyclops, believing that it will bring an end all life on Earth if they're not careful enough on handling the situation. This subsequently leads into a self-contained civil war between the heroic mutant factions, arguing how and why the Phoenix should be dealt with. Fearing that the life of the planet would be led the brink of extinction if the Phoenix isn't taken care off sooner, Xorn left China as he joined the hunt for Jean Grey with the intention of helping ease the situation, while his brother watched over the succession of their post-revolutionized country.

In the conclusion of the Phoenix Prophecy, the mutant civil war was finished after the noble Professor X had selflessly sacrificed himself by convincing the Phoenix Force to possess him, in order to save both Jean's life, and restoring the lost population of mutant kind on Earth, which had costed him his own life in the end, in addition to the death of the Phoenix Force, which apparently had died with her seemingly last host.

Seeing that the threat of the Phoenix Force has been greatly handled due to Professor X's sacrifice, Xorn returned, drastically inspired on Xavier's ideal conviction that although mutant and humankind couldn't and probably won't even unite in the near future, the former could still make a mature yet diplomatic difference by giving the very people Xorn had hated his entire life the chance to let his country's people first be educated of the fact that man and mutant should in order to rebuild a better state and nation in the ashes of their former government's tyranny. While his twin brother Shen was initially skeptic on his his pacifistic suggestion, remembering the way Xavier treated them as mutants made the former reconsider, though it didn't mean that Shen would ever let his guard down if ever an extreme scenario of mutantphobia arises once more across the land that was on the mission to be united and liberated after more than seventy years.

Retrieved from "https://marvelcomicsfanon.fandom.com/wiki/Kuan-Yin_Xorn_(Earth-61615)?oldid=267309"
Community content is available under CC-BY-SA unless otherwise noted.