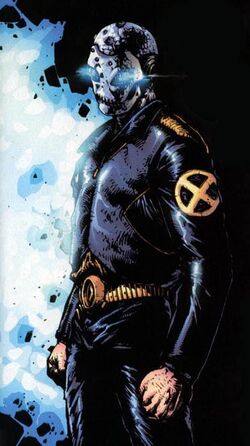 Fools! I'm not an X-Man! Why the X's? Haven't you heard of us? I'm Xorn, and we manipulate fundamental forces of the universe. Forces that you shall die by!

Kuan-Yin and Shen were twin brothers, as well as fellow POW's in America from Japan. Soon, after the war was over, they were released back to Japan. There, a rumor spread that the two brothers were mutants. The Japanese governments started doing experiments to try and eliminate the mutant strain, but when Kuan-Yin and Shen were given the doses, their mutant powers activated. Kuan-Yin's head became a black hole, and Shen's became a sun. The two celestial bodies sucked each other in, and it appeared that they died in a dark explosion of light. But soon after, one body walked out with both powers.

Xorn was able to fly out to space so he wouldn't harm anyone, and he toyed with various planets and celestial bodies just because he could. Soon the Scarlet Witch found him, and asked that he join her Brotherhood. He said that he would, if he were able to control his powers better. She then presented him with a metal mask somewhat resembling a skull. He then took the codename Xorn, and was the 2nd to last to join her cause. His biggest problem soon became whether to refer to himself as "us" since it was 2 psyches and powers dominating for control, or "I," since only 1 body remained. Due to this confusion, he refers to himself as both, and remains one of Earth's most powerful mutants.

Black Hole: Xorn's head can turn into a black hole, which has many powers in itself.

Gravitikinesis: Xorn's black hole allows him to manipulate gravity, to suck objects into the hole.

Omnilingual: Xorn can speak any language by shaking gravity particles in the air.

Death Sense: Able to sense when a death has occurred.

Star: Xorn's head can also become a star, which is several powers in itself.

Photokinesis: Xorn has control over light, the features of this are

Self-Sustenance: Xorn does not need food, water, or air to survive.

Retrieved from "https://marvelcomicsfanon.fandom.com/wiki/Kuan-Shen_Xorn_(Earth-5)?oldid=68446"
Community content is available under CC-BY-SA unless otherwise noted.