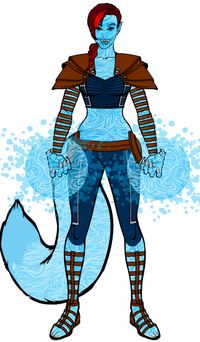 Single
Occupation
Council Personal Body Guard, Enforcer
Education
Taught by the Genetic Council
Origin
Origin
Inhuman experimented upon as an infant with the mix of Terrigenesis, Antigenesis, and Isogenesis to see what would result
Place of Birth
Outside the borders of Hallas and Attilian
Creators

Look to the stars, they always bring some meaning to life.

On another note, it has been theorized that if Kyrja ever came in contact with a star, either by proximity or full contact, she could have her powers amplified beyond now. Or she can, theoretically, become a star itself through the use of her entire body's own energy but at the risk of her own life if she ever did this.

Retrieved from "https://marvelcomicsfanon.fandom.com/wiki/Kryja_(Earth-69112)?oldid=255463"
Community content is available under CC-BY-SA unless otherwise noted.