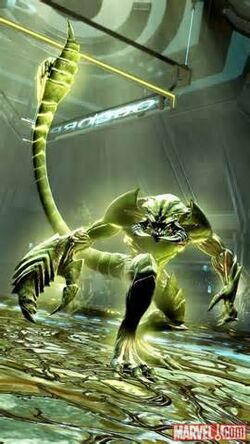 Kron Stone is the older half-brother of Miguel O'Hara (they share the same father, Tyler Stone). Kron has always been a bully and takes enjoyment in other people's pain. But the one thing they both hated most were the Skrulls (who had managed to conquer Earth in this reality).

One day, Kron discovered that his father had been copying files on cross-species genetics done by Dr. Curtis Connors. Wanting power to combat Skrulls, Kron stole the files one year later. He developed a formula from the data, but he centered it around scorpion DNA. Miguel, now Spider-Man 2099, found out what he was doing on attempted to talk him out of it. Kron refused to listen and drank the formula, mutating into a scoprion cross-species.

Another few years later, Kron found out about Alchemax siphoning resources to construct a time-travel device. Kron broke into the main building, killing everyone in the testing room at the time. Miguel confronted Kron, causing in a fight which resulted in both going back in time.

Due to an error made inadvertently by Kron, he arrived in the past 2 weeks after Miguel arrived. Nearby was supervillain Shocker, Kron interrogated him on what year it was (2008 if you've been reading these articles and paid attention to the details) before slamming him on the ground. Kron found a "help wanted" poster made by the Taskmaster to have supervillains join the Ultimate Alliance to fight in the Secret Invasion. Kron's chance to put down the Skrulls once & for all was bitter sweet, as Miguel had also joined the Ultimate Alliance. However Kron still joined out of sheer Skrull neglect.

Retrieved from "https://marvelcomicsfanon.fandom.com/wiki/Kron_Stone_(Earth-7087)?oldid=255343"
Community content is available under CC-BY-SA unless otherwise noted.