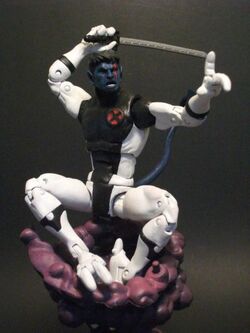 I shall never become your heir, for I have greater faith that my destiny shall be better.

Kristoph was born under unusual circumstances. His parents were both major aristocrats in Germany, from great wealth and power in the country, but noble at heart, hard workers and highly influential and both of them were mutants. However, that became a hindrance in their future, since their powers made them unable to conceive a child. Both of them went through all kinds of attempts but the results they expected never came, that was until they received the call from a mysterious man who offered his help into conception.

A Baby born between Heaven and Hell

The man was called Markus Schtauffen, who introduced himself as a doctor in the field of genetics and offered his revolutionary method to help them conceive. Kristanna was having her doubts, sensing something wrong with the doctor, but Johann agrees, since they've tried every method they found and nothing came as a result. Once they arrived to his chatteau, they submitted themselves into a dual chamber, where the doctor would transfer part of Johann's genes into Kristannas body, as part of a genetic laser transfer in order to estimulate the process of conception through laser systems. The procedure was a success but in order to be sure, he recommended them to never speak about the procedure, yet, he let them know that he will returm to them when the time is due. One month later, during a routine medical check, Kristanna's doctor announced that she was pregnant, finally giving them the miracle they always hoped for and eight months later, Kristoph was finally born

After his birth, Kristoph lived a normal life as any ordinary child. By the time he turned 16, his powers of teleportation manifested, prompting his parents to reveal that he is a mutant, just like them, but nothing changes the fact that they love him. However, things changed when Kristoph turned 20 years old. On the time of his birthday celebration, Dr. Schtauffen arrived to them, revealing the conception process to Kurt in front of his parents. Johann demanded what he wanted and the doctor replied that he just came to collect his heir. After those words, a huge whirlwind of fire surrounded him, revealing his true form as a demon, but not an ordinary demon, but as the devil himself, Mephistopheles. Mephisto revealed that he needed an heir to his throne, so he took advantage of their need for a child to fool them into using the machine, revealing that, while he never transfered Johann's genes but his own, in order to create a powerful demon with mutant genes, and as a proof, he casts a spell to activate his dormant demonic genes, thus revealing his "true form" to his parents

As he was in shock about the situation, both of Kristoph's parents confronted the demon, arguing that, while he may have fooled them, he is still their son, and they love him with all their life and soul, prompting Mephisto to use his vast powers to torture them and slay them right in front of Kristoph's eyes. Mephisto attempted to bring Kurt back into his senses but the shock was so strong that he was almost comatose. Mephisto used his magic in order to start dragging him into Hell, but as Mephisto was bragging about his new heir and how together they will burn the world into flames for a new world order, the memories of all the good and loving times with his family snapped him back, grabbing one of Mephisto's swords in order to attack him, proclaming that he will never become his heir, for he is not his true father and never will be

After his words, he engaged Mephisto in battle, making good use of his teleporting abilities and his sword skills, which he learned in his teens with fencing classes from his mother. Kristoph put up a good fight, but eventually, Mephisto would prove that he is no match for him, however, he decided to let him live, in order to make him see that sooner or later, he will embrace his fate as a ruler of Hell. Once he vanishes, the police arrives to the site, seeing him holding a sword and standing over the dead bodies of his parents, point him as the prime suspect, forcing him to run away and hide. THeir deaths, as well as his "pressumed disappearance" went all over the news, leaving no place to hide for Kristoph, that is ultil he was visited by a mysterious man who introduced himself as Xavier. Xavier conviced Kristophe of his good intentions and through his powers he revealed to him that he was an old acquaintance of both his parents, he met Johanna in college, while he helped Johann to cope with his powers. Johann requested Xaver after Kristoph's birth that he knew that his powers would manifest eventually and that should anything happen to them, he asked him to take care of Kristoph and guide him through the good use of his powers. Seeing his predicament, Xavier offered Kristoph a spot on his team as a safe haven and a place where he can meet new brothers and sisters, which Kristoph accepted in memory of his parents, hoping that with them he can clanse the world of the evil influence of Mephisto

Teleportation: Ability to teleport himself, the clothes he is wearing, and within limits a certain amount of additional mass which is in contact with him. He teleports by displacing himself into the Brimstone Dimension, traveling through it, and then returning to his own dimension at a certain distance from his point of departure. He consciously determines his point of return. The entire process occurs so quickly that Nightcrawler is unaware of being in the Brimstone Dimension at all. Nightcrawler guides himself through the brimstone dimension by an unconscious, natural direction-finding sense. Although Nightcrawler controls his teleportation ability with his conscious mind, his power to teleport is not psionic. Rather it is the result of an unknown biochemical/biophysical reaction which he triggers mentally.

Retrieved from "https://marvelcomicsfanon.fandom.com/wiki/Kristoph_Wagner_(Earth-120986)?oldid=59770"
Community content is available under CC-BY-SA unless otherwise noted.