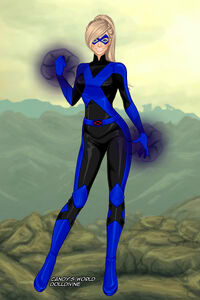 Elemental powers are more than just super it is also the x-gene as well for instance Petra/Kristie Nord is a perfect example. Kristie Nord is the daughter of Maverick. Kristie is among the new generation of mutants, the Professor and the X-Men welcomed her warmly, and she takes the codename Petra.

Petra is a "terrakinetic" or "geo-morph" having the ability to psychokinetically manipulate, control, levitate and reshape the classic element of earth—sand, stone, rock, lava, and/or dirt—and could even transform the consistency of earth and rock, such as turning a lump of coal into a diamond. She also could use this power to cause minor earthquakes and create shapes out of solid rock.