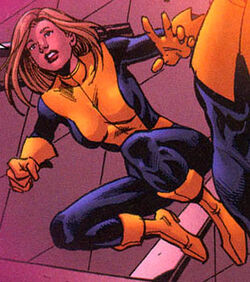 I must tell you, Professor, that woman who adopted me, Moira, her name is? She's the only one who doesn't treat me like the dirt I control. She's the one blessing I have.

Petra's only known name is Kristen. She was originally born in Scotland. Both of her parents died when she was an infant, so she grew up living in the streets. Once, after a man pushed her out of his way, his apartment building sunk into the ground while she stared at it. One day, another man tried to rape Petra. But she trapped him in a giant rock shell, and he shouted for police. She began hiding from everyone, essentially becoming a hermit. But the streets hardened her into a master of combat, even without her powers. Soon she realized she could make diamonds with her powers, and she began selling these to make a living. This made her famous, especially since Scotland was not known for its diamonds. All Kristen would say was, "I have a place." But people still abused her, despite her fame. Moira MacTaggert approached Petra one day, and asked if she was a mutant. Hesitantly, she said yes, and Moira told her not to worry, that she loved mutants. She soon adopted Kristen, giving her the life she always wanted, and she added the last name "MacTaggert" for her.

While living with Moira, she also got to develop her powers to their maximum efficiency. Soon, though, she got a call from Charles Xavier stating that his team was in trouble. He asked her if Petra felt ready to use her powers for the benefit of her entire kind. She agreed, and was allowed on the emergency squad to rescue the team. She soon fell in love with Darwin, but she never told him. When the team got to Krakoa to rescue the team, she found she could use her powers against Krakoa's monsters, but not against Krakoa itself. They never even made it to the X-Men before they were all slaughtered by Krakoa and its monsters.

Geokinesis: Petra has the mutant power to shape rock and earth to her will, which also allows her to cause earthquakes, reshape rock, or alter the consistency. She can also ride the earth in waves.

Combatant: Due to being raised on the streets, Petra can hold her own in unarmed combat.

Weapons Expert: Due to being raised on the streets, Petra is an expert with all bladed weapons and small firearms.

Retrieved from "https://marvelcomicsfanon.fandom.com/wiki/Kristen_MacTaggert_(Earth-5)?oldid=244907"
Community content is available under CC-BY-SA unless otherwise noted.