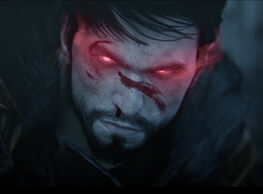 Dating
Occupation
Hero
Origin
Origin
Genetically cosmic DNA from Galactus. Was sent to Earth to destroy but then lost all memories of previous life then was taken under Luke Cage's wing and set out to become a superhero.
Place of Birth
Oklahoma City
Creators

Kor-ann or more commonly know as Daniel Lucas was born at the very center of his universe. For years he laid dormant inside the Cosmic Egg and months later he hatched, but his powers were very unstable and very powerful. This made his father Galan very surprised, as Kor-ann was in need of a mental block to stable his abilities. After two years of growing, his father sent him to Earth to grow older and destroy it, but his ship crash-landed and an explosion happened in the ship, even though Kor-ann was unharmed he lost all previous memories causing Kor-ann to forget his mission. He would later be found abandoned in the forest by Luke Cage and thus he gained the name Daniel Lucas, and would be taken under Luke's wing as his adoptive son.

The Hero In Training

After almost twelve years of training with his adoptive father, Daniel discovered a few of the very many powers he had. At age fourteen he could already start lifting tractors and large trucks with little effort, and when practicing his endurance it seemed he could never run out of stamina and could barely ever get tired. After a few months, Daniel was sent off to Xavier School For Higher Learning to learn more and focus on his abilities, at first he tried to keep a low profile but then he couldn't keep it up anymore. He had been getting bullied and picked on because everyone thought he had no abilities and they called him a fake and poser. One day Daniel had enough and the bullies came back to pick on him but he fought back slamming one into the wall and punching the other up through the roof of the school. He was later expelled from the school and sent off to other countries to learn about spiritual arts and martial arts.

After two years of training in Spiritual Martial Arts and Dark Martial Arts he began finding and stopping random crimes like robberies and heists. Eventually he became a icon to most people and a guardian to most. Daniel was easily able to stop crimes due to his newly found super speed and electrokinesis. One week later the Earth faced a threat so devastating and powerful it could put the entire universe at stake. Minutes later, the Avengers and X-Men came to stop the threat and Daniel joined in and proved to be a worthy teammate. As soon as he thought he was finished he was teleported into another world filled with darkness and destroyed planets. Then for the first time he encountered his father Galactus. His father attempted to control his mind but proved futile because of Daniel's overwhelming power. Once again Daniel helped saved the day and the Avengers and X-Men announced him an official superhero and he had to think of a name one that would relate to him. That day he became Apex.

For being a part time hero Daniel had a pretty sweet life while being Apex. He had enough money to last him a lifetime, and had the Key to the City although fighting crime was one of his main and primary hobbies which sometimes was easy and other times wasn't depending if the criminal has super powers or if they are normal humans. He would set off to be a Superhero instead of a Hero, but he didn't want to get to famous or it would attract the attention of his father. But besides that he spent five years under the name of Apex and eventually changed his name to Apex Predator to show how far he has come and how much stronger he is than when he first became a Hero. After two years of being a hero, the Avengers announced him as a full fledged superhero and he would serve Earth and protect it from threats.

Before gaining his extremely powerful abilities and powers Daniel trained in a special way with the masters of Dark Martial Arts for years before becoming a hero to the public and to the people.

Due to being the purest son of the cosmic god Galactus...Daniel has received more than just the basic powers of his father but has also received some of the abilities of Galactus' relatives and ancestors.

Retrieved from "https://marvelcomicsfanon.fandom.com/wiki/Kor-ann_(Earth-61515)?oldid=195179"
Community content is available under CC-BY-SA unless otherwise noted.