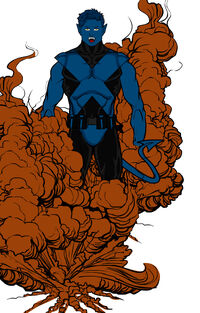 Blue
Unusual Features
Blue skin; Kurt has only three digits (including an opposable thumb) on each hand. He also has only 2 toes on each foot, each longer than an ordinary human's. He has a prehensile tail, approximately 3'6" long, which could support his own weight. Nightcrawler has pointed ears and pronounced fang-like canine teeth. His spine is more flexible than an ordinary human being's, enabling him to spend much of his time in a semi-crouching position without damaging his posture and enabling him to perform contortionist-like feats. His body is almost entirely covered with a fine indigo-colored fur.
Status
Citizenship

Kurt possesses above average strength of a man of his age, height, and build who engages in intensive regular exercise. At his peak, Nightcrawler can lift about 250 lbs.

Retrieved from "https://marvelcomicsfanon.fandom.com/wiki/Konrad_Wagner_(Earth-515)?oldid=258832"
Community content is available under CC-BY-SA unless otherwise noted.