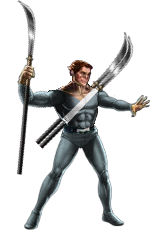 Foolish children... save yourselves... from the energy weapon... of Harpoon!

Not much has been revealed regarding the early life of the Inuit (Eskimo) mutant known as Harpoon. The details of his recruitment by Mister Sinister to the group of assassins known as the Marauders remains similarly unrevealed. Relentlessly deadly and fiercely devoted, Harpoon invaded the Morlocks´ underground tunnels in New York City, intent on wiping out their entire population. Despite fierce resistance from the X-Men, they were merely distractions from the task at hand.

Longitudinal Object Conversion: Harpoon was a mutant with the superhuman power to transform longitudinal objects into various forms of bio-energy. He can imbue any such object with this energy, but the amount of energy varies with the size of the object. Harpoon must then throw the object in order to transform it into energy. He could also charge the object with energy without actually transforming it to energy. Depending on the form of energy with which he imbues them, Harpoon's weapons can stun, shock, paralyze, kill, explode, or disintegrate a living victim or inanimate target.

He was also exceptionally skilled in using his spears as weapons, both in melee combat and as thrown projectiles.

People with a tough enough hide, such as Colossus can survive an attack from his powers.

The reason Harpoon used harpoons was because they are large enough to cause significant damage, but light enough to carry comfortably and easily throw in his quiver.