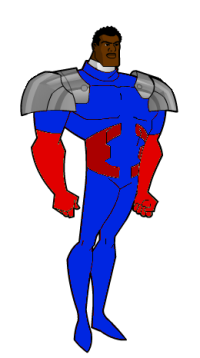 Rook was born to the X-Men Bishop and Rogue. His parents had always been great colleagues, and they turned out to be decent parents as well. Rook was one of the first X-Men to enter battle with the adults. He, unlike his mother, could control his touch since birth, and this made his mom jealous, but happy. When the X-Men were defeated by the Skrulls, and taken prisoner by them, he was freed soon, and his touch was a key aid in battle. However, this encounter gave him a secret fear of aliens of any and all kinds.

Rogue had been loved for her entire life, but she wanted to be able to be touched. She began looking for a way to have a child, and for a suitable father. Bishop had always liked Rogue as a friend, and watched over her as a big brother would. Rogue hypothesized that their combined “energy powers” would produce a powerful fighter for the new X-Men. This hypothesis proved right, as she could touch Bishop, since he was able to absorb her absorption touch, meaning their powers canceled out. 9 months later, their son was born. He was named Kobi, for Rogue’s deceased friend Cody.

Rook grew up rarely using his powers. He loved them, however, as he thought they made him cool. He frequently trained with the X-Men, and he always worked on finding new ways to develop his powers. He proved to be a capable fighter, and a good teammate. Sometimes, however, he lashed out if he felt he was not being heard. This quickly distanced him from some others, but he didn't care. He was mostly raised by Bishop, and he loved hearing tales of the future. When he turned 15, he was allowed the opportunity to be an official X-Man. After years of sitting out and occasionally being an ally, he gladly accepted.

When the Super-Skrulls came to Earth, Rook was one of the X-Men dispatched to fight them. He used his life-absorbing touch valiantly, but he was outclassed by the Skrull's finest warriors. He was taken prisoner, and all seemed without hope. But his teammate Brain Freeze and his colleague Iron Knight broke free and brought in some reinforcements. In his case, the reserve X-Men came in, with an assist from Psi-Lord. He was freed, and bravely took on all 4 waves of the army. By the end, however, he collapsed, and nearly died. He returned to Earth, where the other reserves were made X-Men. But his near-death experience gave him a permanent fear of aliens.

Absorption Touch: Rook can absorb the powers, memories, knowledge, and talents from another person by touch. He automatically mimics the powers of the person he touched, but he has choices of what to do with the residual energy: he can absorb this energy, or release it. Unlike his mother, he can control his absorption touch.

If the energy is absorbed, Rook gains powers similar to his parents, including but not limited to...

If the energy is released, Rook can release this energy in any wavelength of the electro-magnetic spectrum.

Though unknown from where, Rook possesses uncanny knowledge of the human body and body language.

Retrieved from "https://marvelcomicsfanon.fandom.com/wiki/Kobi_Bishop_(Earth-1175)?oldid=58633"
Community content is available under CC-BY-SA unless otherwise noted.