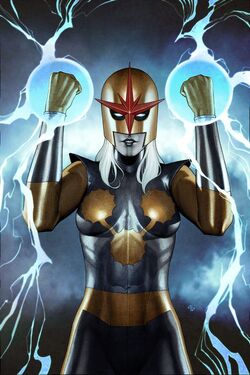 I am here for the Corps. Your world lacks protectors other than your own. The same can be said for other worlds. We protect the known universe, we have made the first step. Now it's your turn.

Ko-Rel is a member of the Nova Corps. She is one of the highest ranking officers within the corps, and possesses the most power as a result:
Superhuman Strength: Ko-Rel can channel the Nova Force to lift in the range of 80 tons.

Superhuman Speed: Ko-Rel can run, move, and think at speeds rivaling that of the finest human. She can reach a running speed of around 300 MPH, and approach light-speed in flight.

Superhuman Stamina: Ko-Rel's muscular tissue is enhanced to the point that she produces little fatigue toxins, capable of fighting for hours before being impaired by fatigue.

Superhuman Durability: Ko-Rel is immune to injury via bullet, great falls, temperature exposure, and great energy blasts. She can survive in the depths of space indefinitely.

Superhuman Agility/Reflexes: Ko-Rel's agility and reflexes combine to enable her to bend and contort herself fast enough to dodge bullets.

Flight: Ko-Rel can use the Nova Force to enable herself to fly through the air at light speed, but she usually flies at supersonic speed instead to avoid damage to Earth.

Energy Blasts: Ko-Rel can generate forces of energy that have many abilities in themselves.

Worldmind: Ko-Rel has access to the Worldmind, enabling her to download information from any source, manipulate and hack technology, and protect her from psionic attack.

Multilingual: Ko-Rel speaks fluent English and Kree, and can download other languages instantaneously.

Retrieved from "https://marvelcomicsfanon.fandom.com/wiki/Ko-Rel_(Earth-5)?oldid=244906"
Community content is available under CC-BY-SA unless otherwise noted.