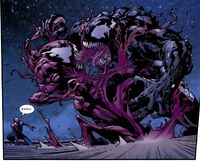 During a project, Norman Osborn was creating a substance that could cure cancer into people. When he kept failing his calculations, he decided to mix multiple substances that caused the birth of sentient "suits" called Symbiotes.

During this time, Norman (in his Green Goblin form), he kidnapped inmates, Eddie Brock and Cletus Kasady and decided to subject to the experiments of bonding with them, causing Norman to create the villains, Venom and Carnage.

Unlike it's Earth-1610 counterpart, the symbiotes don't leech off of people and doesn't act like a vampire suit but rather a 24/7 adrenaline pump injecting your body. It acts more like a healing factor than anything dangerous, with this being said, if the host doesn't eat anything within 45 to 61 days, the suit will become carnivorous and eat the host from the inside due to the suit's attempt to survive.

The suit is agender and doesn't appear to do anything sentient but is a living species of it's own. It's possible to communicate with the symbiote a as a voice in the host's head, it is unable to speak if the host transforms into his symbiote form. Also, unlike it's 616 or 1610 counterpart, the host is able to control the symbiote and use it's powers.

If the symbiote is not bonded with the host, it can control itself. They also are able to release bonding with the symbiote and can last for 5 days before becoming inactive. It can only live forever if bonded with a symbiote.

When bonding with the symbiote, the host is able to use it's abilities to it's fullest power. Able to shaapeshift matter into weapons and also use the suit to carry objects and camouflage. It also able to regenerate and has unlimited growth of the suit. However, it's not able to shape shift it's appearance into what it's want but rather was created in it's design, it can only be altered by using other substances, chemicals and etc, to change the appearance but even then, it doesn't do much other than changes it's color.

Although it has it's limits, it can we weakened but not killed by sonic sounds, it can only be killed by extreme heat and fire. They can "die"/become inactive by starvation but it can come back to life by using Phenethylamine (e.g. chocolate, tater tots, human tissue, etc.,).

Retrieved from "https://marvelcomicsfanon.fandom.com/wiki/Klyntar_(Symbiote)_(Earth-383837)?oldid=227457"
Community content is available under CC-BY-SA unless otherwise noted.