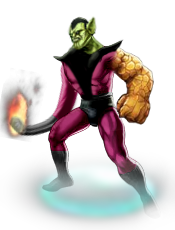 What better way to die than on your feet... With blood on your hands and fallen enemies underfoot?

Kl'rt was a member of the Skrull race. Years before he became the Super-Skrull, he was a decorated soldier in the Skrull army. This led a wealthy Skrullian countess from the planet Z'aragz'na to be betrothed to him. He spawned two children, a son, Sarnogg, and a daughter, Jazinda. Kl'rt favored his son and despised his daughter. However, Kl'rt's duty and devotion as a soldier kept him away from his family, most notably when he fought in the Battle of Harkoon. However after a string of defeats, the disgraced Kl'rt was turned away by his mate, banished from Z'aragz'na and was no longer allowed to see his son, however over the years Kl'rt secretly kept tabs on his life.

When Jazinda grew to adulthood she sought to win her father's respect and joined the Skrull army herself. While on a mission to recover the Sy-Torak Gem from the Kree empire, she was caught in the act. She swallowed the gem and it permanently bonded to her body. Discovering that she could not die with the gem in her system, and that its removal would kill her, Jazinda went into hiding. This failed mission put shame upon Kl'rt's home and he vowed to one day find his daughter and kill her for the disgrace she put upon their family. Meanwhile, Sarnogg underwent his first hunt, an event which Kl'rt witnessed from a distance as he was not allowed to attend.

Under the rule of Emperor Dorrek VII, Kl'rt became the first Super-Skrull. He was endowed with the powers of the Fantastic Four and sent to Earth to conquer it after the Fantastic Four thwarted their previous invasion attempt. With powers that were stronger than his foes, the Super-Skrull was more than a match against the Fantastic Four. Their leader, Mr. Fantastic, deduced that Kl'rt's powers were artificial and beamed to him from the Skrull throneworld. Reed then built a jamming device that cut off the Super-Skrull's power source and he was imprisoned inside a dormant volcano. Still seeking revenge against the Fantastic Four, Dorrek had his scientists boost the transmission signal, allowing the Super-Skrull to break free. Under orders, Kl'rt took the place of Franklin Storm, father of the Fantastic Four's Invisible Woman and Human Torch. At the time, Franklin was serving time in prison for vehicular manslaughter. Posing as Franklin, the Super-Skrull broke out of jail and fashioned the identity of the "Invincible Man", using his "familial" connection to the Fantastic Four to force them to hold back while he committed a crime spree. However, noticing that their foe replicated all their powers, Reed correctly deduced that the Invincible Man was really the Super-Skrull in disguise. Reed then constructed a weapon and threatened to destroy the Skrull Throneworld unless Dorrek agreed to cease his hostilities. The Super-Skrull was teleported back to his homeworld and Franklin was returned. However the Skrulls planned a double-cross as they had planted a bomb on Franklin to destroy the Fantastic Four. Franklin instead sacrificed his life, shielding the FF from the blast, saving their lives and dying a hero.

That Christmas Eve, the Super-Skrull made yet another attack on the Fantastic Four, this time while they were celebrating Christmas at their headquarters in the Baxter Building. Although details pertaining to this battle are minimal, Kl'rt was easily defeated and likely escaped.

Soon the Skrulls' eternal enemies, the Kree, became interested in the planet Earth once again. Seeing that decorated Kree soldier Hulkling was among those on Earth, Emperor Dorrek sent the Super-Skrull back to Earth to convince him to join their side before the Kree did. However, he was confronted by the Young Avengers and Cloud 9 and eventually defeated.

Skrull Shape-Shifting: Like other Skrulls, Kl'rt is a shape-shifter. Thus he has the ability to rearrange the molecules of his body at will into any form, shape or being perceived that he chooses. This allows him him to imitate the appearance of any of the four members of the Fantastic Four, as well as their powers.

The Super-Skrull has been bionically re-engineered to possess the combined superhuman powers of the Fantastic Four.

Thus he can thus mimic the power-sets of;

The Super-Skrull is both the most feared warrior of the Skrull Empire and an outcast of his race. Kl'rt himself is always loyal to the Skrulls. Many in the Skrull Empire considered him a relic from a bygone era, but there are those who consider him a hero.

Kl'rt is wanted by the Nova Corps for crimes against the peace, murder and alleged war crimes.

The quadrant of these crimes are in:

Retrieved from "https://marvelcomicsfanon.fandom.com/wiki/Kl%27rt_(Earth-1010)?oldid=215911"
Community content is available under CC-BY-SA unless otherwise noted.