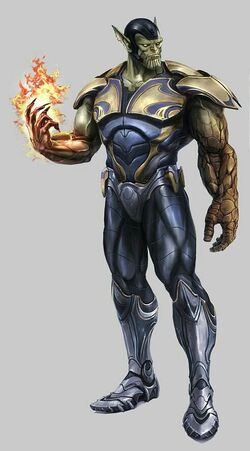 Each of you on your own is quite formidable, even together you are a force to be reckoned with. But I am more powerful than all of you.

In the early days of the Skrull Empire discovering the potential of humanity, Commander Kl'rt was selected to lead a small squad to gather intelligence on the Fantastic Four. They used their natural shape-shifting abilities to pose as the Four, with Kl'rt taking on the form of their leader, Mister Fantastic.

Of course, the real Fantastic Four uncovered their ploy and quickly defeated the Skrulls posing as them. While the other three were apprehended, Kl'rt managed to escape back to the Skrull Empire with a vengeance. Upon his return, he shared the information he had gathered and was selected for the Super-Skrull Program, which he vehemently agreed to.

Kl'rt was experimented on and injected with DNA samples from each member of the Fantastic Four, giving him the powers and abilities of Mister Fantastic, the Invisible Woman, the Human Torch, and the Thing. Dubbing himself the Super-Skrull, he assembled a large task force of soldiers and scientists to return to Earth and claim vengeance on the Four for his fallen comrades.

The Super-Skrull and the Fantastic Four found themselves fairly evenly matched, and ended up becoming fierce enemies for the next several years. Kl'rt would continue to rotate between his role as a Commander and exacting his own personal vengeance, which eventually resulted in Emperor Dorrek being convinced to exile him.

Enraged, Kl'rt dedicated his anger to finally bringing down the Fantastic Four, and then planned to return to Skrullos and kill Emperor Dorrek. However, his rage got the best of him by knocking him off his game, allowing the Fantastic Four to finally capture him. The Super-Skrull was then handed over to S.H.I.E.L.D., who keep him in a stasis cell on the Raft.

Retrieved from "https://marvelcomicsfanon.fandom.com/wiki/Kl%27rt_(Earth-101)?oldid=262771"
Community content is available under CC-BY-SA unless otherwise noted.