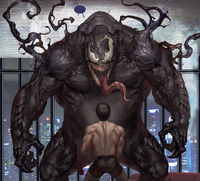 Anti-Venom (Not be confused with Anti-Venom)
Identity

No One Can Stop Me! NO ONE!

-- Kingpin when attaching to the Mania symbiote

Kingpin was born in an unknown early life.

As a crime boss, it's known that he had a wife that he loved but soon, his wife died in an train accident that occurred. When the Great Symbiote Civil War happened in New York, he ended up in hiding and witnessing the chaos that was ensued.

One it was over, he managed to continue his crime duties in his industry.

Retrieved from "https://marvelcomicsfanon.fandom.com/wiki/Kingpin_(Earth-7777)?oldid=220114"
Community content is available under CC-BY-SA unless otherwise noted.