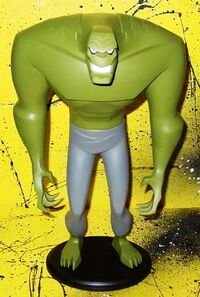 No Hair
Unusual Features
Whole body covered in scales and has a tail.
Status
Citizenship

Brad was born with a skin disease that made his skin turn into scales. When he was young his mother turned him out into the streets and Brad lived off of scraps and lived in trash cans. He later joined the circus an through surgery gained a tail and a snout he also filed his teeth to points. After a few years in the circus he became a cocaine dealer. As his condition worsened and he was becoming more animal like he became a serial killer and the media named him Killer Croc, years later after killing many people he was put in prison but after getting broken out of prison he joined the Outsiders.

Brad has hardened scale like skin. He also has razor sharp claws and teeth. He can regenerate lost limbs. He has super-strength, reflexes, durability, speed, agility, and senses.

He has much greater strength than a average human.

Retrieved from "https://marvelcomicsfanon.fandom.com/wiki/Killer_Croc?oldid=39492"
Community content is available under CC-BY-SA unless otherwise noted.