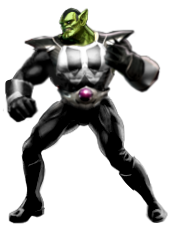 As part of their conquering strategy, the Skrulls genetically engineered one of their race to be an exact replica of the Kree hero Mar-Vell and implanting false memories to make him believe he was the real hero. In order to eventually recall him to their side when the invasion was underway, a random Earth painting was to be inserted into his mind as a trigger. However, Khn'nr awoke during the procedure and the Skrulls erased the memories of the real Khn'nr. Believing himself to be the real Mar-Vell, he went wild, slaying the Skrulls and escaping into the Negative Zone.

Eventually he found his way back to Earth and, while impersonating the hero, he created real bonds with humans. After many battles for Earth, "Mar-Vell" sought to escape the hectic super-hero life and journeyed to Paris to visit the Louvre, where he came upon the very painting that had been set as the trigger to awaken his full memories. Soon, "Mar-Vell" returned to the world, claiming he was going to help protect it, regardless of his origins.

During the start of the Kree-Skrull invasion, he attacked both species' ships. He destroyed many of the fleet but was attacked by a Super-Skrull which killed him.

Barely alive after his effort, he managed to crash back on Earth, crossing Noh-Varr's path. Before passing of his wounds, Khn'nr spurred Noh-Varr into protecting Earth from both Kree and Skrulls.

Solar Energy Metabolics. Khn'nr possessed the ability to metabolize solar energy and convert it for a variety of uses, including conversion of the light of the sun and stars into different forms of light and energy.

Retrieved from "https://marvelcomicsfanon.fandom.com/wiki/Khn%27nr_(Earth-1010)?oldid=243090"
Community content is available under CC-BY-SA unless otherwise noted.