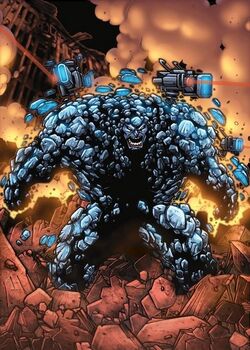 People tell me I'm as dumb as a post. Well, they were half right. I am Post, and humanity shall pay for their crimes against mutants!

Kevin Tremain was always abused. He had no friends at school, and his home life was shabby. He grew up as a very stupid boy, and he was mocked by classmates for this. He was secretly very smart, but he began becoming a recluse. His mother always tried to make things better, but it was no use. The man who would become Post was far gone.

Soon, he developed mutant powers, and his skin became coated in rocky armored plates. He tried to hide this power as much as he could, walking around in baggy clothing, and hiding his face. But one day, he was discovered in an alley, and he was pestered and attacked with a baseball bat by anti-mutant people. He let his powers out, and cloaked himself so they could not see him. Then he led a telepathic assault that nearly killed them. Scared, he ran, and after a few days, was found by the Scarlet Witch. She asked him if he wanted to be a part of a radical anti-mutant group called the Brotherhood, and he agreed. Choosing the name Post, he was the group's first new member.

Super Durability: Post's armor protects him from most impacts and heavy blows.

Armored Plates: Post's armor allows him to detach them and convert them into energy pistols, or cloak him to his surroundings and teleport.

Telepathy: Post can communicate mentally and is protected from telepathic attacks.

Weapons Expert: Post has trained for many years with firearms, and is an expert in handling them. He is also an expert in using his armor in gun form.

Retrieved from "https://marvelcomicsfanon.fandom.com/wiki/Kevin_Tremain_(Earth-5)?oldid=244905"
Community content is available under CC-BY-SA unless otherwise noted.