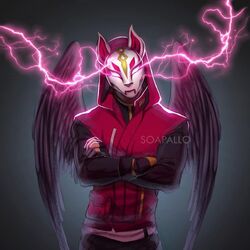 Kenji Yoshida is the youngest child in his family. His parents were always cold and distant, leaving his older brother, Shiro, to take care of him. Eventually, Shiro abandoned the family after he developed his mutant powers. This only caused a rift to develop between Kenji and his sister, Mariko.

Kenji would eventually discover he had mutant powers of his own, although much different from his brother's. Not only was he able to grow and retract fully capable wings at will, he was able to absorb and redirect energy in a static form. He followed Shiro's example and ran away from his family, going underground and becoming a vigilante. He donned a spiritual mask and named himself Ryoken, which means Hellhound. He quickly gained a reputation among the streets of Japan as a thief and a killer, which eventually attracted the attention of the Hand, who sought to make use of his abilities.

After serving the Hand for a time, he came into conflict with the Wolverine, who dismantled the local sect of the Hand and eventually bested the Ryoken in combat. He was transported to America in order to be detained in the Raft, where he was evaluated by Nick Fury and General Ross to join the Thunderbolts. He initially refused to join, but after the promise of early release, he agreed. He then discovered he would be working alongside his former leader from the Hand, Elektra.

Retrieved from "https://marvelcomicsfanon.fandom.com/wiki/Kenji_Yoshida_(Earth-101)?oldid=250460"
Community content is available under CC-BY-SA unless otherwise noted.