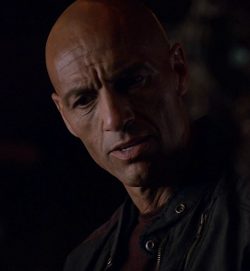 Kebo was contacted by Grant Ward, a rogue HYDRA agent, who gave him a mission to find other rogue agents in order to cleanse and rebuild the organization. When Kebo and three of his colleagues found Ward in Goldbrix Tavern, they could only find few names. Kebo then objected to Ward for giving him orders, to which Ward replied by slamming Kebo's head into broken glass, scarring his face and knocking him unconscious.

There are easier ways of getting money than kidnapping."
"Mr. Braun needs to see the world for what it really is. He can open many doors for us.

With more and more HYDRA agents being recruited Kebo and Grant Ward, the pair turned their attention to recruiting Werner von Strucker, the son of the HYDRA leader Baron Wolfgang von Strucker. To this end, Ward and Kebo found and attacked a former HYDRA agent Carmine. To question him they took his new sports car and crashed into Carmine, driving through their warehouse with him clinging to the bonnet for dear life. Ward spoke to Kebo about Carmine and the old HYDRA's greed before throwing Carmine off the car. They then surronded him and demanded he surrender von Strucker's location.

Carmine quickly gave up the information and told them that Werner von Strucker was living on a boat, paid for with his father's money. Grant Ward and Kebo scouted out the area and quickly spotted the young von Strucker having a party on the boat surrounded by beautiful women in bikinis and his security team. Kebo and Ward once again spoke about how HYDRA wasted their money due to their incredible greed and never used it to it's fullest potential, using the example of von Strucker never having let his ship out of the dock.

Kebo was ordered by Ward to silently swim to the side of the boat without being noticed, once there he unleashed a bag full of rats on the deck to scare away the women so they were not harmed. While the women ran away in fear and disgust, Grant Ward casually walked onto the boat and began subduing von Strucker's security team with minimal effort. When one of the guards managed to punch Ward in the face, Ward responded by shooting and killing the man before capturing von Strucker.

I figured you for a mummy's boy. One slap and you spit out the info. It's been a good run kid, now let's just get to the end.

Kebo and Grant Ward brought Werner von Strucker back to their base where they told him that he had never earned a single thing in his life and had wasted his families' money. Ward demanded that he hand over all his wealth to them by giving over his banking passwords, when von Strucker resisted Ward punched him in the face and made it clear that he wasn't asking his money but was going to get it, so he ordered Kebo to torture von Strucker by removing his teeth and fingers until he handed over the money.

Kebo began to mercilessly beat Werner von Strucker, mocking him for his cowardliness. However when von Strucker began crawl away from him out of fear, he instead grabbed a blade and stabbed his torturer in the leg before grabbing a solid item and hitting him repeatedly. Grant Ward then entered the room, when von Strucker tried to use his family as leverage, Ward made it clear that he knew who he was, noting that Baron Wolfgang von Strucker was one of HYDRA's greatest leaders. Ward told him that he had earned his respect by fighting Kebo, he was then invited to join their branch of HYDRA.

You certainly don't make it easy to get a meeting."
"The boss doesn't want it to be easy. But he's always interested in meeting people who can prove themselves."
"Sounds like an interesting bloke. I look forward to meeting him some day.

Kebo was contacted by a HYDRA thug and gun trader named Spud, who had a new recruit who was interested in meeting Grant Ward. Spud arranged to fight the recruit at a HYDRA fight club, where the new man proceeded to beat him to death. The man was brought to meet with Kebo, who laughed upon seeing the man's bloodied body; Kebo told him that Ward was always interested in meeting people who could prove themselves to HYDRA.

In order to show his loyalty to HYDRA, the new recruit named Richy offered Kebo a large box of weapons. As Kebo showed the guns to Grant Ward they discussed Richy's worth to them before going on to talk about the comparisons between S.H.I.E.L.D. and HYDRA. Although Ward showed strong destain towards S.H.I.E.L.D. he noted that they at least had the right mindset, claiming that they would take their time like them before tearing the organisation down.

Kebo offered Richy the chance to join them on a mission, which he agreed to. Eventually they collected him and once again searched him, destroying his phone before putting him in the boot of their car, despite his protests due to the bad smell coming from the car. Kebo drove Richy to their HYDRA base, which he noted was currently unnamed. They discussed whether or not Grant Ward had ever worked for S.H.I.E.L.D. before Richy began to ask about their plans and questioned if they were planning a raid soon.

Spotting Ward, Kebo attempted to introduce him to Richy, but to his shock, Richy revealed that he had lied about his name before stealing a gun and attempting to kill Ward. A gun fight broke out and Kebo was able to get into Ward's office with Ward while Richy, whose real name was Lance Hunter, killed the other guards alongside his backup Melinda May. Ward, Hunter and May began talking to each other from their positions, insulting and taunting one another. Ward then ordered Kebo to contact Werner von Strucker and tell him to film the murder of Andrew Garner.

Although Grant Ward attempted to convince the pair to surrender to save Garner's life, Hunter refused to give up and instead advanced upon them while shooting his gun. Kebo managed to break a window by throwing a desk through it and ran to the truck with Ward behind him; however, Hunter managed to fire a shot which wounded Ward in the shoulder. Kebo was able to bring his boss to safety and they drove away while Hunter continued to fire down at them.

Having found themselves a new hideout, Kebo and Grant Ward watched as new weapons were unloaded from a van. They discussed how S.H.I.E.L.D. had sent Lance Hunter to try to kill Ward and Kebo was accused of being sloppy as he had allowed him into HYDRA. Kebo defended himself and they changed the subject to Werner von Strucker, who had disappeared after failing to kill Andrew Garner. Ward ordered Kebo to hunt down and kill von Strucker before S.H.I.E.L.D. could find and question him.

As Kebo's search proved fruitless and von Strucker seemed to have disappeared for good overseas using his father's wealth, Kebo was contacted by Gideon Malick, an old HYDRA ally to Baron Wolfgang von Strucker who was feared by everyone who knew of his reputation. Malick demanded to speak to Grant Ward and so Kebo returned to the facility where he gave the phone to Ward, who intially questioned why he was not looking for the young von Strucker. Malick told Ward that he was willing to give him von Strucker's location as he claimed he was willing to join Ward's side as sacrifice von Strucker. Ward ordered Kebo and go and kill von Strucker for him.

I've taken down men three times your size girl. What makes you think you can beat me?"
"Experience.

Under Grant Ward's orders, Kebo and a small team of HYDRA agents followed Gideon Malick's instructions and soon found where Werner von Strucker was hiding in Lisbon. They quickly surrounded and captured von Strucker before tying the terrified boy up to the ceiling where they proceeded to torture him by beating him mercilessly and cutting into his skin, all of which Kebo took great pleasure in inducing.

Suddenly the door was kicked down by Melinda May and Black Widow who were armed and ready for a fight. Kebo smiled at the chance to kill May before stabbing von Strucker in the gut and escaping out the door while May fought his men. Romanoff chased him outside onto the roof where she quickly defeated the two guards waiting for her. Kebo attempted to attack her but found himself struggling against the Widow's twin stunning Batons and the fight soon led to them both falling into the swimming pool.

Kebo used his superior strength to hold Romanoff under the water and attempted to drown her while he bragged about killing men such larger than her. She was able to grab hold of one of her stunning batons from under the water and used it to hit Kebo in the crotch and face before getting out of the water. Kebo questioned what made Romanoff believe she could kill him and she replied that it was experience, before using her baton to send a massive electric shock through the water which killed Kebo.

Retrieved from "https://marvelcomicsfanon.fandom.com/wiki/Kebo_(Earth-1010)?oldid=136027"
Community content is available under CC-BY-SA unless otherwise noted.