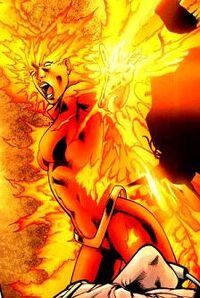 Kayla was born the illegitimate daughter of William Stryker. She never had contact with her father, but Kayla felt fortunate for that. She grew to despise William for not staying with or caring for her mother. The only connection between the Strykers and Bishops was when William's son, Jake, would visit his sister.

His only reason for coming was to make up for what his father had done. Though only a few years older than Kayla, Jake acted with a maturity she had never seen before.

Kayla discovered she was a mutant about the time Stryker created his Purifiers. Before their creation, William and a select few of his followers came to the Bishop home with the intention of murdering its occupants. Angelica Bishop died trying to sneak Kayla out. The young girl witnessed her mother's death at the hands of Stryker. With her powers unleashed, Kayla killed Stryker's followers in a fit of rage. William was the sole survivor of the murder gone wrong.

Weeks later, Kayla planned an attack on the Purifiers to destroy them. She witnessed many mutants being rounded up and killed on site daily. Those who went public were forced to go into hiding or risk death. Before the costumed mutants acted, Kayla decided to go on the offensive first before more innocent lives were lost.

Kayla's attack began at night as she fought her way into the Purifier's compound. During the struggle, Kayla managed to get herself captured. She was restrained through the use of a collar that nullified her powers. Two Purifiers dragged Kayla into a room, where she saw her brother, dressed as a priest, standing. Jake asked the two men to leave, which they did. She had not seen him face to face for years. Jake helped Kayla to her feet and hugged her. Kayla questioned her brother as to why he aligned himself with the Purifiers.

Jake responded that he believed what they were doing was right. He said they were doing God's work, to purify the Earth of the non-pure. Before Kayla could respond, William walked in on them. He had a sinister smile on his face, which Kayla glared at in anger. William went behind her and grabbed hold of her throat. Jake stood by with terror in his eyes. Stryker threw a knife at his son's feet and demanded that he kill the mutant.

Jake refused continuously, but stopped as soon as William placed a pistol against Kayla's temple. He looked at his son and said, "As you wish my boy." At that instant, Jake kicked the knife into the air, grabbing it in one swift motion, and then hurled it at his father. The weapon plunged deep into William's arm, who released his grip to grab his wounded limb. Kayla turned to roundhouse him into unconsciousness. She removed the knife from his arm and prepared to kill him with it before being stopped by Jake.

More Purifiers began to flood the room from behind and Jake led Kayla outside promising to find her once more. While making his way back inside, Jake threw Kayla the key to her collar and smiled as if everything were going to turn out alright. Kayla began her escape, but stopped suddenly at the sound of gunfire. The people whom her brother had been loyal to, gunned him down. Not wanting to risk capture again, Kayla fled in search of allies for her next and final assault on the Purifiers.

Rise of the Mutants

As Firestar, Kayla recently aligned herself with both the X-Men and the Brotherhood of Mutants.

Microwave Emission Immunity: Firestar is apparently immune to the microwaves she emits.

Defense Training: Kayla is an above average athlete and has had some training in hand-to-hand combat.

Retrieved from "https://marvelcomicsfanon.fandom.com/wiki/Kayla_Bishop_(Earth-202)?oldid=256255"
Community content is available under CC-BY-SA unless otherwise noted.