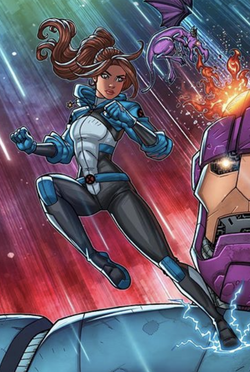 Go ahead, try and kill me. Give it your best shot, it'll land in the wall right behind me.

Kitty Pryde's mutant powers of density shifting manifested when she was a teenager. Not long after, she was recruited into the X-Men by Magneto to help fight against Apocalypse. She stayed with the X-Men for a few years and became close friends with Jean Grey and Iceman.

However, after Magneto was captured by Ultron and the X-Men started rarely leaving Krakoa, Shadowcat became disillusioned. She left Krakoa and began investigating the work being done by the Secret Warriors. Her investigation led her to meeting Quake, the team's leader.

Shadowcat convinced Quake to expand the Warriors' membership to include more than just Inhumans, reminding her that the entire reason for the fight against Apocalypse was to restore equality for all races and species across the world. From then on, she and Quake have become good friends and lead the team together.

After the Secret Warriors founded the safe haven of New Attilan, Kitty became slightly disillusioned with the mission. She considered leaving to rejoin the X-Men, but after talking with some of the residents and seeing their point of view, she came to the conclusion that staying with her team to protect the people was the only real option.

Can Shift Density to Increase Strength

Retrieved from "https://marvelcomicsfanon.fandom.com/wiki/Katherine_Pryde_(Earth-9999)?oldid=246105"
Community content is available under CC-BY-SA unless otherwise noted.