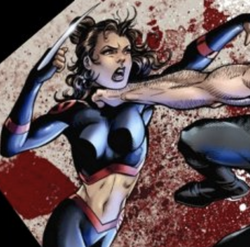 Earth-675
Base Of Operations
The Outside
Characteristics
Gender

Come on, don't be a pussy like those other versions of me that I killed.

Katherine Pryde was abducted by the Hand as a child when they developed an algorithm for who would grow up to be mutants. Her powers manifested when she was 14, long after she had been trained to be a competent assassin. Her first targets were her parents, whom she had no idea she was related to. She would later be experimented on by the Hand, who surgically implanted bone claws into her forearms that they recovered from a dead mutant they had assassinated. For the next few years, she would assassinate some of the Hand's most wanted targets, her phasing powers turning her into a legend called the Shadowcat.

Shadowcat was later recruited into the Renegades by The Outsider after Odin was killed. She became a very valuable asset to the Renegades for their next several missions.

She was a present member of the Renegades when they were pitted against the Outsiders. She fought long and hard, but her molecular structure was eventually destabilized by hellfire conjured by Colossus.

Retrieved from "https://marvelcomicsfanon.fandom.com/wiki/Katherine_Pryde_(Earth-675)?oldid=244557"
Community content is available under CC-BY-SA unless otherwise noted.