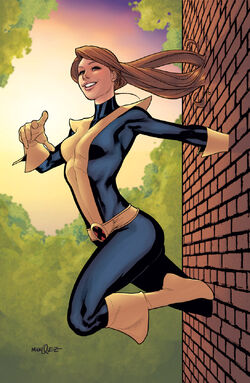 Born around the late 1980s somewhere in Illinois, mutant Katherine "Kitty" Pryde was born to a strong, independent single mother named Theresa Pryde. Kitty's mutant powers began to manifest at a young age, discovering that she was able to rise and lower herself through solid objects while she was accidentally locked inside her chemistry laboratory after class, much to her astonishment that she was "gifted." However, her loving mother, upon learning her ability, abruptly became over-protective and concerned knowing how this conservative society that they were living in would react and respond to "someone of her kind." Seeking help from the mutant pacifist Professor Charles Xavier to give her daughter a safe space and a heavenly place for mutants to grow and develop with their powers and abilities, she became a student at Xavier's School for Gifted Youngsters, located at the X-Mansion, Westchester County, New York.

Xavier brought Kitty to Xavier's School for Gifted Youngsters, where Kitty herself expected she would learn and train to control her own ability in order to join the heroic X-Men. She befriended several mutants including Xavier himself and Professor Warren Worthington II, and several fellow students such as seniors Scott Summers, Hank McCoy, Ororo Munroe, Lorna Dane, and Jean Grey, though she would also befriend students and trainees of the same age group as hers, which included Warren Worthington III, Bobby Drake, Kurt Wagner, Rogue, Jubilee, and Piotr Rasputin, whom the latter had developed some secret lingering feelings for Kitty. Unfortunate for Peter, Kitty was dating Bobby at the time, rendering him to keep it until the two would break up at a much later time.

Despite Kitty's hopes and expectations of becoming an X-Man quite sooner, she would only end up feeling sheer dejection and utter disappointment after finding out that she was restricted to join the X-Men in outside activities and was only allowed to participate in indoor and any other training courses within the reaches of the X-Mansion, with Xavier reluctantly revealing to Kitty her mother's strong condition to keep her from becoming a full-time X-Men member if it involved dealing with fighting crime and other villainous mutants. Initially feeling enraged at and betrayed by her mother for keeping this overprotective secret, the latter apologized though still defended herself, explaining that her decision was done out of her care and love for her daughter in order to keep her out of danger.

This argument had inevitably caused a severe strain between the relationship of mother and daughter, but as time passes, Kitty later realized how truly concerned and loving her mother was for her with the helpful advice of her closest friends, knowing that she's the only family she had ever since her father left them for unknown reasons. Eager to fix her relationship with her mother, Kitty went home to apologize with each other and spend a day with her once again, reconciling their relationship as it has always been since the beginning. By the end of that day, Kitty's mother finally told her that she could now join the X-Men, only for Kitty to answer that her mother was right to think that way, in which Kitty assured and promised her that she would remain as a trainee and sometimes be a part-time member for the X-Men in which she surprisingly excels at, unless the world would be finally need her help and by such moment she would finally get her chance to phase out of the shadows and debut as a mutant superhero.

When the mysterious and diabolical Movement Alliance conducted a series of massive terrorist attacks all over the world destroying several famous and sacred landmarks, killing over 1,500 people on the very first day of their worldwide assault. Consequently, all the Movement's opposing adversaries, the heroes, were united into creating their own Ultimate Alliance, in order to stop and prevent the Movement from commencing its schemes upon world domination and authoritarian rule, before its too late. For the first time in her, Kitty and some of her fellow schoolmates have never seen a conflict this atrocious and appalling and as they watch the ongoing news being reported across the world.

Eventually, the adult Kitty finally gripped the chance to officially join the X-Men as her self-styled codename Shadowcat and as the heroic mutant team momentarily merged with the rest of the Ultimates and battle the forces of Movement. During one of the ensuing conflicts, Shadowcat along with her teammate, good friend, and on-and-off flame Colossus had teamed up with some Avengers, most notably her idols Hawkeye and Spider-Woman, on intervening the A.I.M. faction and some Hydra troops under the command of George Tarleton, whom they were able to defeat thanks to their cooperative efforts.

In the end of Sinister's short-lived reign, the villain was eventually founded by the mutant alliance (both Magneto's Brotherhood and the X-Men) once again in Genosha, after a dying Archangel threw a tracker on him without him noticing it, earlier during their battle. In the end, all of Sinister's clones were killed mostly by the overly-empowered Rogue, and he as well was finally defeated after he was defenseless after being surrounded by the X-Men and the Brotherhood, who used all their mightiest strength and powers against him that subsequently disintegrated the villain in the process, killing Mister Sinister and ending his tyranny in several countries all over the world and the Ultimate War itself once and for all. In the aftermath of Ultimate War, Kitty returned to the X-Mansion since graduating from University of Washington with her PhD, registering as a professor and an X-Men trainer now that she was and would always be, an X-Man.

After returning back to the X-Mansion to lay rest from a long month of fighting, an exhausted Peter suddenly bursts in joy (internally) when he found out that Kitty came back home after finishing graduate school from University of Washington, though he was either too insecure or somewhat shy to be personal with her once more due to the time just the two of them would hang out. Kitty, who secretly missed Peter after how many years they've last seen each other with just the two of them, person approached him and professed her love back for him, as he had done for her after a few years back. Peter was dumbfounded in the best imaginable way, overwhelmed that the very woman he had always care for so long who initially rejected him, now surprisingly loves him back, making him believe that sometimes miracles are real. The two kissed with uttermost passion arising from the bottom of their hearts and spent the night together at Kitty's room, although they simply yet lovingly slept, embraced, and snuggled beside each other until dawn since Kitty insisted they should wait "a little bit more."

Homo Superior Physiology: Shadowcat is a mutant who possessed the ability to pass through solid matter and objects by passing her atoms through the spaces between the atoms of the object through which she was moving. In this way she and the object through which she was passing could temporarily merge without interacting, and each was unharmed when Shadowcat had finished passing through the object. This process was called "phasing."

Retrieved from "https://marvelcomicsfanon.fandom.com/wiki/Katherine_Pryde_(Earth-61615)?oldid=266338"
Community content is available under CC-BY-SA unless otherwise noted.