Oh, please, I could take you all down on my own! Who needs the X-Men?

Shadowcat is one of the youngest members of the X-Men, but she is also one of the most capable. She is dedicated to the cause, and has always had a fighting spirit. Eventually, when Nick Fury formed the Ultimate Alliance, Shadowcat was able to convince Professor X to let her join and fight the Cabal. 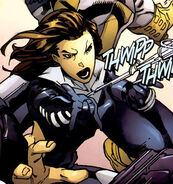 March on Ultimatum
Add a photo to this gallery
Retrieved from "https://marvelcomicsfanon.fandom.com/wiki/Katherine_Pryde_(Earth-6110)?oldid=252188"
Community content is available under CC-BY-SA unless otherwise noted.