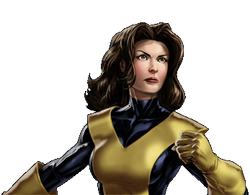 Katherine "Kitty" Pryde is a mutant from Illinois with phasing abilities. She was able to rise and lower herself through solid objects. She was a student at Xavier's School for Gifted Youngsters, personally invited by Professor X himself. Her identity is apparently known to the government, as Senator Kelly refers to "a girl from Illinois who can walk through walls" while addressing congress on the matter of Mutant Registration.

Shadowcat is a mutant.

Phasing/Intangibility: Shadowcat possessed the ability to pass through solid matter and objects by passing her atoms through the spaces between the atoms of the object through which she was moving. In this way she and the object through which she was passing could temporarily merge without interacting, and each was unharmed when Shadowcat had finished passing through the object. This process was called "phasing." When Shadowcat was phasing, she was, for all intents and purposes, intangible. Hence, when attacked, she could shift into a "phasing" state (even if she was not at the time passing through an object) so as to allow oncoming projectiles or energy blasts to pass through her harmlessly. Shadowcat passed through objects at the same rate of speed at which she was moving before she "entered" it.

Expert Martial Artist: Shadowcat possessed moderate expertise of the martial arts of the Japanese ninja and samurai. Shadowcat demonstrated great knowledge of ninja methods of combat, as well as street-fighting methods taught to her by Wolverine.

Dance Training: Kitty is trained in ballet and modern dance. She continued to take dance training under the tutelage of Stevie Hunter, and was highly agile.

Genius-level Computer Expert: Shadowcat was an expert in the field of computer science, demonstrating genius-level aptitude for programming, modifying, and diagnosing almost any computer system: even those of unfamiliar human and extraterrestrial origin. She used her skills in many high-stress combat situations to great effect, and in combination with her mutant ability to disrupt electrical systems she was a formidable foe for any enemy relying on advanced technology.

Multi-lingual: She speaks fluent Japanese, Russian, the royal and standard languages of the Shi'ar Imperium. She also has moderate expertise in Gaelic, Hebrew, German and Skrullos.

Mystical Vulnerability: While phasing Shadowcat was still vulnerable to mystical attack, however.

Phasing Limitations: Since she was unable to breathe while "inside" an object, she could only continuously phase through solid objects (as when she traveled underground) as long as she could hold her breath. Denser materials were more difficult for Kitty to phase through, sometimes causing her pain. Solidifying while in an object could cause serious injury if not death. As it is an active ability, if she can't see an attack coming, she can't phase through it.

Equipment: Kitty's X-Men outfit is made of leather.
Transportation: Blackbird
Weapons: Sometimes she uses her hair ribbons as weapons

Retrieved from "https://marvelcomicsfanon.fandom.com/wiki/Katherine_Pryde_(Earth-1010)?oldid=101850"
Community content is available under CC-BY-SA unless otherwise noted.