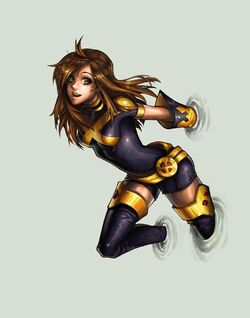 Stick and stones will phase right through my bones, but your words hurt, you know.

Kitty Pryde was the apple of her parents' eye growing up. The night before her 16th birthday, however, her mutant powers manifested and she accidentally phased through her bed and landed on the kitchen table, breaking it. Her parents were at a loss for what to do, and eventually found themselves contacting Professor Charles Xavier. They were scared for their daughter's future, but they wanted to do what they could to help her.

After Xavier explained what his school was about, Kitty agreed to give it a try. It took her a few weeks, but eventually she was able to stop accidentally phasing through things. She even became great friends with Iceman, who told her the story of how he proved himself to the X-Force as a worthy member.

Kitty took his advice and when she saw the opportunity, during a rogue Sentinel attack, she saved Cyclops from a blast that would've been fatal, and proceeded to deactivate a Sentinel by running through it and making the circuitry go haywire.

She was then allowed to join the team under the same conditions as Iceman, if she put her studies first and never put herself in harms way. She chose the name Shadowcat, and quickly became one of the team's most useful members. She would later go on to form meaningful friendships with Rogue, Nightcrawler, and Colossus, as well as Wolverine coming to see her like a daughter and vehemently protecting her.

After X-Force battled Apocalypse and his Horsemen, the Archangel managed to save the other Horsemen from the mental control they were under. While Sabretooth returned to the Brotherhood with Blink, Archangel convinced Magik to join X-Force to redeem themselves. Illyana was nervous for the change in her life, but was welcomed into the family by her older brother, Colossus, and everyone else. Kitty especially went out of her way to make Illyana feel comfortable, and the two of them quickly formed a bond like Kitty had never experienced before.