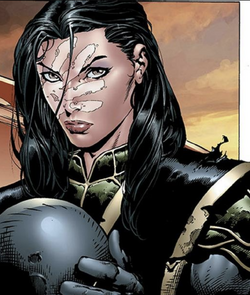 I haven't been in a joking mood for about thirteen years.

Kate Bishop joined S.H.I.E.L.D. right out of High School and began training under Hawkeye and Black Widow. She later assisted in the fight against Apocalypse, but after S.H.I.E.L.D. fell, she went off the grid to protect her family. However, she was too late, as she discovered her family had died in the collateral damage of the war.

She then adopted the mantle of the Ronin and began traveling the world, attacking Apocalypse's strongholds. It wasn't long before she got on the Avengers' radar, who sent Hawkeye to recruit her. The two reconnected after not speaking for a long time, and he offered her a chance to heal by being around people who have been through the same things as her.

After a mission against the Armada, Ronin ended up getting captured by the Horseman of War. Rather than killing her in the moment, he was ordered by the Archangel to bring her to the Sphinx, the death camp for superheroes. She was placed inside mere days before his order of mass execution. Kate fought hard until her last moment, but was led into a Terrigenesis Chamber and exposed to the Mists, where she died of exposure due to lacking Inhuman DNA.