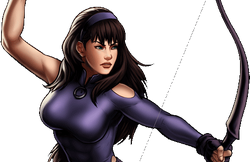 I have no powers and not nearly enough training, but I'm doing this anyways. Being a super hero is amazing. Everyone should try it.

Kate Bishop grew up as the youngest daughter of a rich Manhattanite family. Her father was emotionally distant and busy with work while her mother died while she was still young. Though Kate was close to her older sister, Susan, she developed a very independent, blunt, and stubborn personality.

A few months prior to her sister's wedding, Kate was assaulted while walking in Central Park. The event initially left Kate traumatized and isolated. However, the ordeal eventually motivated her to learn several forms of combat fighting and self-defense. She quickly became proficient in swordplay, archery, and martial arts. She also met with a therapist during this time to work through some of her issues.

After the attack, at the hospital, Kate was approached by Cassie Lang, daughter of Ant-Man. Together the girls tracked down the Young Avengers to the ruins of the Avengers Mansion, where the girls confronted the team and invited themselves on as members. To join the team, Kate donned gear from the Mansion including Mockingbird's Battle Staves and mask, Swordsman's Sword, Black Widow's utility belt, and Hawkeye's Bow. After saving the world, Kate and Cassie remained on as permanent members.

Kate Bishop is a baseline human with no superhuman powers. However, she does possess several skills, including:

Kate Bishop is a baseline human with no superhuman powers. However she does possess several skills, including:

Equipment: None known.
Transportation: Hawkeye's Volkswagen Beetle
Weapons: Kate wields a variety of weapons modeled after ones she had obtained from the Avengers Mansion before returning them to Captain America:

Retrieved from "https://marvelcomicsfanon.fandom.com/wiki/Katherine_Bishop_(Earth-1010)?oldid=220218"
Community content is available under CC-BY-SA unless otherwise noted.