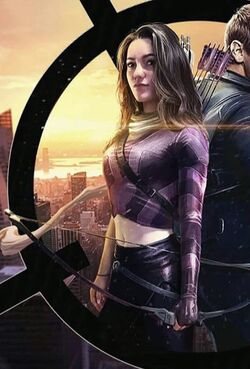 Come on, old man. Three trickshots, winner gets to call themselves Hawkeye.

Born to Hawkeye's deadbeat brother, Barney, who abandoned her as a child, Kate Bishop always wanted to prove herself. When her mother finally confided in her the truth about her heritage, she instantly began training in archery. Kate was a natural, and quickly discovered that it was more difficult to miss than to make her target.

In an attempt to catch Hawkeye's notice, Kate fashioned a vigilante costume and the code name "Artemis", after the Greek Goddess of the Hunt, and set out to fight crime. However, before Hawkeye could notice her, she was approached by Riri Williams, who was putting together a team of "Young Avengers".

Artemis ecstatically agreed to join, only to discover she was the first person recruited. She and Riri then worked together from there to find other young heroes to put together the team, including Ant-Man's daughter, Cassie, Luke Cage's daughter, Danielle, the reincarnated twin sons of the Scarlet Witch, Billy and Tommy, and more.

After the Young Avengers made their public debut, Kate was sought out by Hawkeye. Initially planning to reprimand her, after discovering she was his niece, became ecstatic and agreed to train her. The two have since become very close, having a playfully mocking relationship. Clint would never say this out loud, but he believes Kate is a better archer than him.