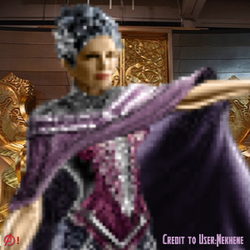 Queen of Asgard, The Queen of Norns, Mistress of Magic, Mistress of Mysticism, Queen of Enchantment, Enchantress Supreme, Empress of Evil, Witch
Identity

The birth and early life of Karnilla were shrouded in mystery. All that was really known is that she had long lived in Nornheim, the Asgardian province where the Three Norns dwelt, the goddesses of destiny, and she became one of the most accomplished practitioners of the arts of sorcery in the Asgardian dimension. Although Nornheim lied on the Asgardian land mass within Asgard's own dimension, and although Karnilla was apparently of the Asgardian race, she did not consider herself to be subject to Asgardian rule. Rather, Nornheim was an independent country, of which Karnilla was absolute monarch.

Karnilla lived opulently in the ancient fastness of Nornkeep, attended by her servant, the aged minor sorceress Haag, and troops of guardian demons. Although there were many demons among her subjects, Karnilla's realm was also populated by humanoid immortals, just as was Asgard proper. Karnilla's relationship to the goddesses of destiny was unknown, although they were clearly beyond her jurisdiction.

In the past Karnilla often proved to be an enemy of Asgard, wanting to take over the throne, and acted in alliance with the Asgardian god of evil, Loki. However, Karnilla was long in love with Asgard's noblest warrior, Balder the Brave.

Karnilla was responsible for the creation of Ragnarok, convinced that once every notable Asgardian warrior was dead, she could be Queen.

Karnilla possesses the conventional attributes of an Asgardian woman ("goddess") as well as mastery of the mystical arts of Asgard. Like all Asgardians she is extremely long-lived (though not immortal like the Olympians), superhumanly strong, immune to all diseases, and resistant to conventional injury (Asgardian flesh and bone is about 3 times denser than Earthly flesh and bone, accounting for Asgardians' greater strength and weight). Her Asgardian metabolism gives her far greater immunity than human endurance at all physical activities, though she seldom deigns to indulge in unnecessary exercise.
Her powers are ranking or leveling through Asgardian "gods" and "goddesses"

Karnilla possesses vast magical powers that are equal to Loki and is surpassed only by Odin. Karnilla's magical powers derive from two major sources: her innate capacity to manipulate magical energy, which she has honed through long practice, and her acquired knowledge of spells and enchantments of Asgardian origin. Her ability to wield magical energy for personal use is only surpassed among inhabitants of the Asgardian dimension by Odin. Through sorcery she is afforded a host of abilities: the enhancement of physical and sensory abilities, the power to assume different forms and attributes, and the ability to deploy mystical energy for offensive and defensive purposes, in the form of magical power bolts and shields.

Karnilla's vast knowledge of arcane lore enables her to cast spells with a variety of specific effects. The many spells she has utilized include illusion casting, temporary paralysis or sleep, deflection of oncoming matter and energy, inter-dimensional teleportation, and elemental conversion. These spells derive their potency from the ambient mystical energy of Asgard's dimension or power-objects found therein. (Of course, she can also use her magical abilities with full effectiveness when she is in Earth's dimension.) Karnilla is capable of casting inter-dimensional spells, and of casting spells that have permanent effects. She created Ragnarok out of her arcane knowledge.

Succeeding in her invasion, Karnilla killed Odin and crowned herself Queen of Asgard.

Has extensive knowledge of ancient and arcane magic.

Karnilla possesses the normal superhuman strength of an Asgardian woman of her physical age, height, and build, and can lift (press) at least 25 tons.

Retrieved from "https://marvelcomicsfanon.fandom.com/wiki/Karnilla_(Earth-1010)?oldid=206576"
Community content is available under CC-BY-SA unless otherwise noted.