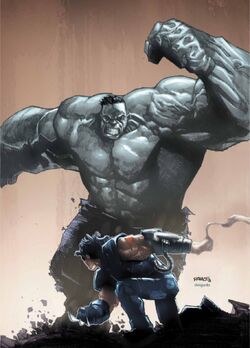 I'll rip you to shreds for ruining my life. You're dead to me, you arrogant little piece of sh*t!

Doctor Karlos "Karl" Kort was a high-class Russian agent formerly working for an unidentified communist country. His secret core mission was to destroy United States-affiliated military bases and research installations (including S.H.I.E.L.D., Stark Industries, and A.I.M.) using his advanced mechanical inventions. Due to the severity of the damage caused by his acts of sabotage, it was mistakenly believed that only the Hulk could be the saboteur.

Later, Kort was secretly hired by S.H.I.E.L.D. at the Desert Base in the exchange for a large amount of fortune (in which he immediately agreed), acting as assistant to a disguised Bruce Banner who was still in-hiding, so that director Nick Fury can easily confront into reasoning with Banner, so S.H.I.E.L.D. can help him find his cure. All of the mission was well-coordinated, until Karl decided to finally execute his true mission, sabotaging S.H.I.E.L.D.'s mission and unleashing the monstrous Hulk onto them.

Broken by the Hulk

Unexpectedly, Kort's unsure method of manipulating and confusing Banner to release his rage and anger against Fury by turning him against the director somehow worked, turning Banner into the unstoppable Hulk and attacks everyone at the base, including Kort himself, who was ironically the individual to be the most injured, since he had caused the Hulk's berserk in the first place. After the incident in which the Hulk escaped again (as usual) after facing the temporarily S.H.I.E.L.D. recruited Thing, Karl suffered several fractures and broken bones throughout his entire body, leaving him in a state of paralysis for a couple of months.

As an act of mercy, Nick didn't even consider having Karl be taken into custody as a arsonist and hijacker, and even paid for his hospital bills for a short while, before finally leaving his sight without any given notice. Realizing about what the Hulk had done to him, he vowed retaliation against Banner for "ruining his life and his reputation," and will immediately find a way to destroy him, one way or another, once he finally recover from his injuries which were caused by the Green Goliath.

Due to his probably-irreversible and untreatable condition, an act of desperation had led to Karlos getting himself secretly injected with a experimental super soldier serum (revealing to be a sample of the mutated Hulk Serum), as well as Ben Grimm's mutated blood sample that was found at the scene during his brawl with the Hulk, along with the final ingredient using the treatment of gamma radiation, causing him to subsequently transform into the Hulk-sized monstrosity that would be later dubbed by his future found enemies as the infamous & underrated Demolisher.

He then proceeded to go on a reckless rampage and causes destruction throughout the small towns of New Mexico as he tried gaining the attention of the very monster, along with the agency entirely responsible for what has happened to him currently, who supposedly ruined his entire life and long-desired career to become a scientist supreme by sabotaging several organzaitions. Unfortunate enough to Kart, his main intent to never came to pass, and instead of facing the Hulk, the Demolisher was confronted by the heroic quartet, the Fantastic Four. Both the hulking behemoth and the four ruthlessly battle in the middle of New Mexico, to which the Four's combined efforts had gained the upper hand on the mutated Kort using his own modified ray gun, ultimately defeating the monster in the end. Afterwards, he was immediately taken into custody by S.H.I.E.L.D. for committing the illegal act of genetic tampering.

Karl was one of the Raft's escapees during Mister Sinister's destruction throughout New York to California after Sinister (while using the remaining Pym Particles) manages to destroy most of the prison's structure, killing most of it's super-powered prisoners and security & staff, but manages to leave a few number of prisoners, including Karl to escape the wrecked facility and started causing mayhem in the streets of New York City.

After Apocalypse's reawakening, where he battles Sinister in order to prove that he is far more superior than his so-called "follower," Sinister eventually mind-controls Karl and the rest of the villanous escapees to attack Apocalypse. This eventually helped Sinister to gain the upper hand into defeating Apocalypse, until Apocalypse went berserk and kills the mind-controlled prisoners by stepping on them at his giant form, except for the Demolisher, who continues to mindlessly attack Apocalypse until he was effortlessly crushed and smushed by his massive fist into a ruined building, seemingly killing him in the process.

Transformation: During his experiment, Karl secretly mixed an early version of the Infinity Formula, a synthesized Banner's and Ben Grimm's blood sample and gamma rays, Karl Kort was transformed into the Hulk and Thing-like humanoid, knwon as the "Demolisher."

Retrieved from "https://marvelcomicsfanon.fandom.com/wiki/Karlos_Kort_(Earth-61615)?oldid=218797"
Community content is available under CC-BY-SA unless otherwise noted.