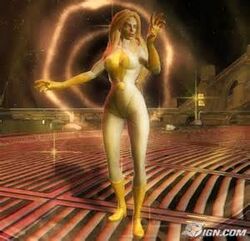 Single
Occupation
Adventurer; formerly psychologist
Education
PhD in Psychology
Origin
Origin
Dr. Karla Sofen was a renowned psychiatrist, with a nasty craving for power and control. When asked to cure Lloyd Bloch, the original Moonstone, she instead used hallucinogens to persuade him to give her his moonstone.
Place of Birth
Van Nuys, California
Creators

Little is known about Moonstone's life before the Civil War. It can be assumed to be similar to his mainstream counterpart.

Moonstone was one of the indoctrinated Thunderbolts. She is encountered twice in Prison 42. The first encounter has her and Bullseye guarding Firestar that they're trying to infect with nanites. Moosntone's next seen guarding the portal out of Prison 42 with Whirlwind, Diamondback, Electro, Scorcher, the Lizard, and the Grey Gargoyle.

Moonstone was among the former Fold operatives to be scarred to the point of committing suicide.

Retrieved from "https://marvelcomicsfanon.fandom.com/wiki/Karla_Sofen_(Earth-6109.2)?oldid=158764"
Community content is available under CC-BY-SA unless otherwise noted.