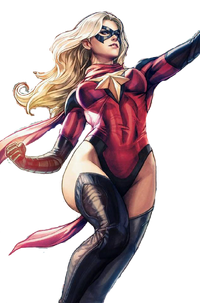 Karla Sofen grew up the daughter of a maid to a privileged family. She was forced to be a "playmate" to Deanna Stockbridge, the family's daughter who was her age. Deanna saw Karla as a true friend. Karla feels the same about Deanna and decided to dedicate her life of helping others outside of wealthy lifestyle.

Karla's destiny came calling when she was given the powerful Moon Stone by John Bloch and somehow Karla was able to absorb the essence of the moonstone through a sheer act of will. The intensity of the transfer was so great that it even granted Karla the ability to absorb Bloch's Moonstone armor into her own bodily tissue. With Bloch now powerless, Karla Sofen became the new Moonstone and joins the Avengers.

Karla remained Moonstone until Carol Danvers promoted her as the new Ms. Marvel when she took over the reigns as Captain Marvel.

Karla is describe as a strong willed woman fighting for what's right.

Same as her Earth-616 Counterpart

Same as her Earth-616 Counterpart

Karla as Ms. Marvel is a Contrast to her mainstream who is power hungry with greed while this version is more sweet with empathy and honor

Retrieved from "https://marvelcomicsfanon.fandom.com/wiki/Karla_Sofen_(Earth-16160)?oldid=222644"
Community content is available under CC-BY-SA unless otherwise noted.