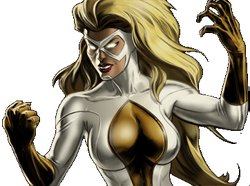 Single
Occupation
Adventurer, Prisoner; Former psychiatrist
Education
Doctorate
Origin
Origin
Dr. Karla Sofen was a renowned psychiatrist, with a nasty craving for power and control. When asked to cure Byron Becton, the original Moonstone, she instead used hallucinogens to persuade him to give her his moonstone.
Place of Birth
Van Nuys, California
Creators

First appearance
To The Moon and Back

Karla Sofen was once a respected psychiatrist who trained under the tutelage of the criminal Doctor Faustus. She even assisted Doctor Faustus in his grandiose attempt to take control of Manhattan Island. Faustus' plans never came to fruition however, due to the efforts of Captain America. As Cap rounded up Faustus' men, Sofen hid herself inside the baggage compartment of the doctor’s private 747, thus evading capture.

She later used her psychiatric credentials to gain access to the prison cell of Byron Becton – the original Moonstone. Using hypnosis, she convinced Becton that he was in fact a hideous, loathsome monster. The psychological trauma was so severe that it caused his body to reject the moonstone within him.

Energized by the emotional rush, Karla was able to absorb the essence of the moonstone through a sheer act of will. The intensity of the transfer was so great that it even granted Karla the ability to absorb Becton's Moonstone armor into her own bodily tissue. With Becton now powerless, Karla Sofen became the new Moonstone.

A short time later, Moonstone decided to hire herself out to the subversive organization known as the Corporation. The Corporation sent Moonstone on a mission to Gamma Base in New Mexico to purloin a top-secret piece of military hardware known as a Gammavator. This incident brought her into conflict with the gamma-spawned monster, the Incredible Hulk. At first, Moonstone was able to provoke the Hulk into a savage frenzy thereby earning her the sympathy of psychiatric colleague Doc Samson, but before long, the Hulk overpowered Moonstone, exposing her identity of Dr. Karla Sofen.

Karla's powers are the result of her fusion with a gravity stone designed by the alien Kree. After being absorbed into her body, the stone took on the form of energy that permeates her nervous system. Karla once acquired a second gravity stone, increasing her powers to new limits. However, she currently only possesses one stone and her abilities have reverted to their old levels. If the stone is removed from her body, Karla will die in 72 hours without its support.

Expert Hypnotist: She is particularly skilled in using hypnosis. Like her predecessor, Doctor Faustus, Moonstone has perfect pitch and modulation in her voice, and was even able to use these talents to cause General Thaddeus "Thunderbolt" Ross to suffer a complete nervous breakdown.

Retrieved from "https://marvelcomicsfanon.fandom.com/wiki/Karla_Sofen_(Earth-1010)?oldid=150210"
Community content is available under CC-BY-SA unless otherwise noted.