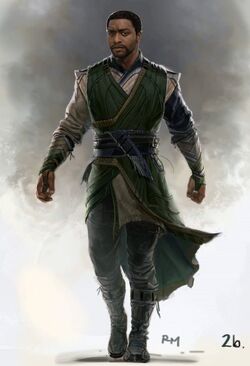 You do not consider the consequences, Strange... We already broke our rules. Just like her doings. The bill comes due... Always...

Born in the fall of the early 1940s, Karl Amadeus Mordo was the son of Nikolai Mordo, a Transylvanian nobleman who also was formerly the “Baron” when his lands fell under the control of Nazi Germany during the World War II. Bitter over the Nazis' rapid growth of success, its generals and politicians, and the encroachments of modern technology, Nikolai sought to restore Transylvania to its past glories via black magic. Nikolai was then tutored in the mystic arts by his then-mistress, Miarka, Witch Queen of the Gypsies, and secretly a former Master of the Mystic Arts. The German Sturmbannführer Krowler, who was also a secret powerful mystic, needed a grandson to further his ends, and arranged the marriage of his daughter, Sara, to Nikolai. That union produced a son, christened Karl Amadeus right after he was born.

When Nikolai’s plans to recreate a new Carpathian kingdom through sorcerous means came close to fruition, Sturmbannführer Krowler ordered his daughter to kill Nikolai, which she did gleefully, but ended up regretting it later on, catching him unaware and channeling her father's power. Sara took her son, left Varf Mandra and lived at her father's castle, where young Karl Amadeus was tutored by Krowler. However, one day, the teenage boy overheard a conversation about Nikolai’s murder; he swore vengeance, vowing that, as the second Baron Mordo, he would achieve his father’s hopes and more.

Though Sara might have hated her former lover whom she even killed out of anguish and out of her father's command, even she started feeling guilty and regret for what she had done to him and what she unexpectedly did to her son at the hands of her own abusive father, and starts worrying for his poor condition, getting continuously tortured for loyally siding with his father, before and even after his untimely death. Feeling broken and saddened by her own irreversibly traumatizing actions, Sara decided to reveal Karl every single secret, every single legacy Karl's father has once kept for him before, specifically regarding on how to be able to master great sorcery through the noble teachings of the secret mystical peace-keeping organization, the Masters of the Mystic Arts.

Having to learn about this surprising revelation, Karl eventually forgave his mother and abandoned his achievements on becoming the second Baron. During the last year of the great war, Karl finally had his chance to escape his grandfather Heinrich and leave the castle, thanks to the sacrificial efforts of his own mother, who presumably perished fighting her own father in a mystical duel, in order to begin his long journey in search of Miarka and the rest of the Masters of the Mystic Arts. Unfortunate enough for Karl, Miarka was nowhere to be found, giving him more and more difficulty in finding out the true whereabouts of the Masters of the Mystic Arts and where its hidden location could be found.

Having suffered a tragedy in his life due to his father's death and his abuse from his own grandfather, Mordo eventually came to the Kamar-Taj to become one of the Masters of the Mystic Arts a few years later, as what his father and even his mother has once promised, in order to gain revenge for his great loss, although he was initially disrespectful to the teachings and way of life he found there. Mordo was trained by the great Ancient One in the Mystic Arts and soon became a Master, putting aside his desire for revenge and dedicating his life to the mystic arts and protecting the world from harm.

As one of the, if not, the closest disciple of the Ancient One, he assists in Stephen Strange's training, believing that Strange had a great potential that could help them defeat the disillusioned rogue sorcerers who followed the great malicious entity Dormammu, Kaecilius and his minions, the Zealots. He then pointed out that he was once proud and brash like Kaecilius but was taught a better way by the Ancient One, so eventually she let Strange back into the Kamar-Taj to train. As the Ancient One's disciples clash with Kaecilius and his Zealots one last time later on, Mordo is outraged upon discovering that the Ancient One has also been using power from the Dark Dimension to prolong her own lifespan, which he considers a violation of magic and nature. Despite this revelation, he is still upset when she is killed by Kaecilius.

Losing Faith in the Mystic Arts

While Strange took the Ancient One to Metro-General Hospital where she eventually died, while Mordo returned to Kamar-Taj where he overlooked the wreckage from the last attack and became deeply disillusioned about his master and her cause, believing her bending of the laws of nature made her responsible for Kaecilius' fall towards the dark side. Mordo was joined by Strange who informed him of the Ancient One's death, with Mordo expressing his great disappointment that the Ancient One was not the person he had thought she was. Mordo went on to note how drawing power from the Dark Dimension could have corrupted her into a follower of Dormammu. He concluded that her hypocrisy had led the Zealots to Dormammu. Strange requested Mordo's help in stopping the Zealots, which he agreed to.

Mordo and Strange regroup and battle the Zealots in Hong Kong, where Strange encounters Dormammu. Though Strange manages to thwart Dormammu's plot by using the Eye of Agamotto in order to create a time loop, Mordo is once again furious over this, viewing it as another perversion of natural law. Though the threat has finally been defeated, a disillusioned Mordo turns his back on his allies, noting that the bill would come due for them all, as it always did. As of that, Mordo turned away and left for parts unknown.

The Hunt for Rogue Sorcerers

Later on, Mordo visits Jonathan Pangborn, a factory worker who had previously healed his damaged back by using magic he learned from the Ancient One. He tells Jonathan that his loss of faith in the Ancient One's teachings has given him time to think, and he begins to talk about the true nature of magic. Jonathan becomes disturbed by Mordo's intense behavior and prepares to defend himself, but Mordo overpowers him and strips him of his magical abilities. Mordo tells the crippled Jonathan that he has realized that there are too many sorcerers in the world, indicating that he now plans to steal the abilities of others magic-users, ironically and hypocritically using it all for himself.

Dormammu once possessed Doctor Strange's body and tried to use him to commit crime and take over the world. This plot eventually fails and Dormammu is driven out of Strange's body by the rest of the Masters of the Mystic Arts. Dormammu then retreats back to the Dark Dimension and tries to regain his might again. Dormammu, who wanted revenge, immediately ordered the Mindless Ones (one of those he sent was the transformed Kaecillius and the Zealots) to attack Earth. Mr. Fantastic had invented a device, which could've send the Mindless Ones back to their home dimension by channeling the energies of the heroes nearby. However, the device also allowed Dormammu's separated energies to be reabsorbed by Dormammu once again.

Dormammu, who was already regaining full strength, was interfered with by Strange again. With the aid of Avengers, Fantastic Four, and the Defenders, both Doctor Strange and Dormammu were both taken to an unknown land which is beyond the effect of time. Doctor Strange takes his chances and sends him and Spider-Man back into time using the Eye of Agamotto, only a day before the great invasion of Dormammu, and stopped him from seizing the ultimate power, once again. Dormammu was defeated once again, but that doesn't stop him from ever continuing on his conquest invading Earth.

Although the latter has finally been foiled by Strange and some of the Earth's Mightiest Heroes, little did everyone know, that the true great mischievous mastermind behind Dormammu's mysterious arrival and second attempted invasion on Earth was all Mordo's secret doing, to which Strange and the rest of the Master of the Mystic Arts would eventually find out, in later time. Even later on, it was revealed that Mordo had used Dormammu's dark spells in order to abduct and imprison the last surviving Mindless One on Earth inside the abandoned Castle Mordo's dungeon, who was revealed to be Kaecilius, or at least it was Kaecilius.

In the meantime, Dormammu's against the heroes of Earth was a success to Mordo in actuality, having Dormammu's secret magical, world-destroying spells through Kaecilius as a part of an important ingredient to his next step into commencing his currently unrevealed plan against Masters of the Mystic Arts, believing that this plan of his would ultimately teach the "hypocritical" sorcerers the "valuable lesson" that they would truly deserve to learn. After having to probe Kaecilius' mind and absorb all of his secret knowledge on the teachings of the Dark Dimension, Mordo then used one of Dormammu's dark, destructive spells to ultimately obliterate a mindless Kaecilius into pieces, intently killing him in the process, with him implying that he had enough from him that he needed to know and have.

Mordo had the ability to tap this universe's infinite store of ambient magical energy and manipulate this to a variety of effects. The skill derived from three major sources: personal powers of the mind/soul/body, powers gained by tapping the universe's ambient magical energy and employing it for specific effects, and, finally, powers gained through the tapping of extra-dimensional energy by invoking entities or objects of power existing in tangential mystical dimensions. (The latter means of power is usually gained by reciting incantations.) Some of these effects included:

Retrieved from "https://marvelcomicsfanon.fandom.com/wiki/Karl_Mordo_(Earth-61615)?oldid=235608"
Community content is available under CC-BY-SA unless otherwise noted.