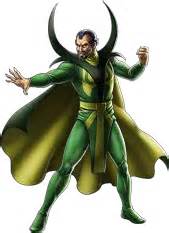 Baron Karl Mordo is the evil sorcerer and arch enemy of Dr. Stephen Strange and is one of the big villains in the Masters of Evil. Baron Mordo is usually seen plotting with Enchantress, Loki, Ultron, and Dr. Doom.

First seen plotting after the Ultimate Alliance finish their mission at Mandarin's Palace, Baron Mordo casts a spell causing the Orb of Teleportation to redirect it's course from Castle Doom to Murderworld. Later on, he is seen listening to Loki's want to destroy Thor and Enchantress' complaints about Thor having to die. Next, he is fought on the way to Raven's Peak with Ultron in which both are easily defeated and left for dead.

Prior to Marvel: Ultimate Alliance 2

Whilst stranded in Jotunheim, Ultron & Mordo searched for a way back to Earth. However, both were attacked by Frosts Giants separate from Ymir and Mordo was killed in the ensuing battle.

Retrieved from "https://marvelcomicsfanon.fandom.com/wiki/Karl_Mordo_(Earth-6109.2)?oldid=128660"
Community content is available under CC-BY-SA unless otherwise noted.